MANILA, Philippines–He may be known for singing the standards, but on Friday night, Canadian crooner Michael Buble showed that he wasn’t a fan of the ordinary.

Taking songs requests from “Aquino and Abunda Tonight” host Kris Aquino, Buble unexpectedly forgot the lyrics to some of his most popular hits. He, however, made up for it by telling his fans attending his concert Saturday night that they can make their own requests by tagging his own official Instagram account (michaelbuble).

He also asked Aquino if he could take a “selfie” with her to mark his “official welcome” in the Philippines. The host obliged with a “yes, please. Thank you!”

“You are the sweetest,” Aquino told Buble.

The singer looked like he took two snapshots–one with his usual smile and another with his wacky face.

Immediately after the interview, he posted the selfie with the caption: “Hey Manila!!!! Thrilled to be back in the Philippines and thanks to @aatofficial and @beingkrisaquino for the incredibly warm welcome. #homeawayfromhome #salamat #crushonkris #MBworldtour” 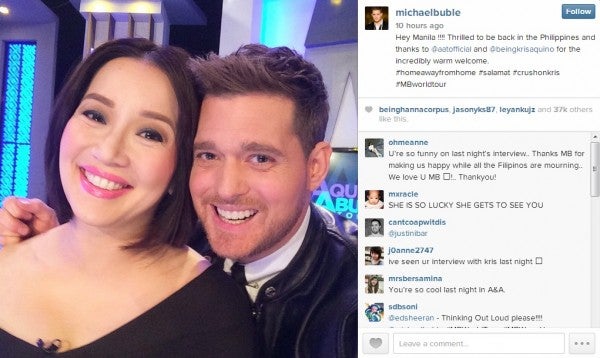 The post has since garnered more than 36,000 likes as of this posting. Buble has more than 894,000 followers on the photo-sharing social networking site.

Aquino also reposted the photo with the caption: “On a day when I just had to stay strong (and) accept with steadfast courage all the anger, on a day when I felt how hard it was to practice quiet dignity, on a day I taught myself that it’s not about me, that my pain is minuscule in comparison to the widows, mothers, fathers (and) brothers I spent quiet, private time with last night, when not one of them spoke to me harshly or blamed me in the way I had to endure from those who have the ability to post but not the will to do actual good, when in actuality from those most hurting I received sincere appreciation even when I was so prepared for hatred, I went to work (and)did my job (with) self-respect and grace. Sa lahat sa inyong pinaramdam sa (‘kin) ang inyong pagmamahal at respeto, I shall hold in my heart those posts. To my guardian angel, thank you. 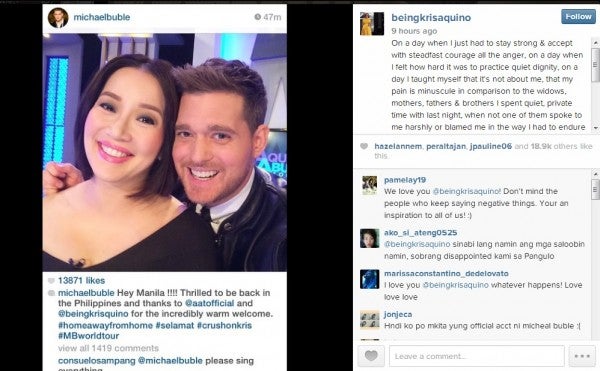 Buble is back in the Philippines for a one-night concert at the SM Mall of Asia Arena as part of his “To Be Loved” world tour. IDL

Bublé back for a night

Michael Bublé to perform in Manila on Jan. 31

Read Next
A closer look at the ‘Beauty and the Beast’ cast
EDITORS' PICK
How Filipinos are embracing digital technology amid the coronavirus pandemic
DOH expands list of workers for priority testing
Water remains our saving grace right now
Palace: Gov’t can force quarantine for mild cases
Enrollment drops more than 25%
Win the Samsung Galaxy S20+ BTS Edition at the Smart K-Quiz Night on July 18
MOST READ
Metro Manila stays under GCQ until July 31
ABS-CBN to start retrenchment by end of August, as franchise remains elusive
Defensor dares Tañada to public debate on ABS-CBN franchise issue
Enrollment drops more than 25%
Don't miss out on the latest news and information.