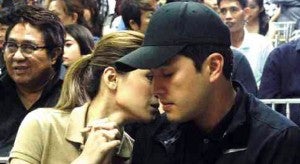 MANILA, Philippines—Celebrity couple Toni Gonzaga and Paul Soriano on Sunday revealed that they are now engaged.

The couple, in a relationship for seven years, said that they will get married this year.

In an interview with the ABS-CBN entertainment show The Buzz, Soriano narrated how he proposed to the actress. The director said that he proposed after Gonzaga’s birthday dinner last January 20 in their family home in Rizal.

The proposal was witnessed by Gonzaga’s parents, Bonoy and Pinky, and her sister, Alex.

Gonzaga admitted that the announcement was somehow inappropriate as the country is facing a difficult situation, following the death of 44 elite cops in a clash in Maguindanao.

Last Sunday, she was supposed to celebrate her birthday at The Buzz yet failed to show up, citing personal reasons.

“That is why I attended my other two shows because it will not require me to be honest,” she jested, pertaining to ASAP and The Voice, which both aired live.

Aside from the revelation of her engagement, she also clarified that she was not pregnant and did not have a fight with her parents.

Read Next
Justin Timberlake, Jessica Biel confirm having a baby
EDITORS' PICK
The Best Tech Gifts For The 2022 Holidays
Is it safe to talk politics again at family gatherings? ‘The Reconciliation Dinner’ shows us what that’s like
EDITORIAL: To a bike-friendly future
House energy committee chair Arroyo bats for cheap electricity
vivo’s coming to town to grant wishes with more holiday promos
Pagasa: Warm, sunny Sunday in most parts of PH
MOST READ
LOOK: Vhong Navarro transferred to BJMP detention facility in Taguig
The Elephant Man in the Senate
Posh village as ‘shabu’ haven
LOOK: Zanjoe Marudo bonds with Ria Atayde, her family
Don't miss out on the latest news and information.