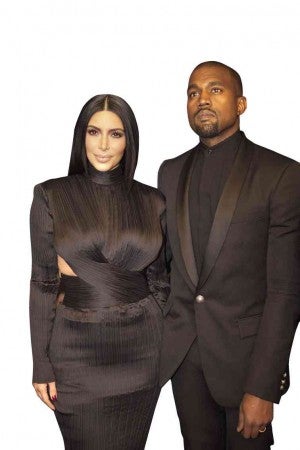 KIM KARDASHIAN (left) and husband Kanye West appear in the popular series “Keeping Up With the Kardashians.” AP

Huh? Isn’t reality TV supposed to be actually taking place to real people instead of actors—which is why viewers like watching it, because it’s like peeping into a 24/7 human aquarium? Uh, think again.

In the beginning, reality TV may have been nonacted actuality. But, after it gained popularity and made producers rich because it was so inexpensive to whip up, absolute reality slowly gave way to a more “managed” and “shaped” variety. Take the new couples show, “Married at First Sight,” which gets strangers hitched and sees if their union can hold up for at least five weeks:

The participants may be real people, not actors, but they’re all good-looking or at least “interesting,” and that subjectively “colors” and limits how they progress during the challenge.

For one thing, good-looking people tend to be self-centered, pleased with themselves and “feeling entitled”—so, they sometimes (often?) turn out to be difficult and demanding love partners.

True enough, in the TV tilt, most of the participants are skittish about really sharing, which is what love is supposed to be all about, and frequently make selfish decisions that tick off their respective partners!

So, it’s definitely not true that what happens to the beautiful people in this TV “experiment” can be extrapolated from, and reflects what could happen to the general population. As a result, the “experiment” is one big botch.

Adding to the feeling of dubious reality that “real” TV shows engender is the fact that TV thrives on conflict, so even the most banal of actual situations and relationships are subjectively tweaked and hyped up to make them more “interesting” and “viewable.”

Take the Kardashian family’s many reality shows: Each of them has to end every day’s telecast on a conflicted “high,” so potentially problematic people or other irritants are periodically lined up and sequentially put into play, to keep viewers avidly viewing. Where’s the reality there?

A new subjective element and distraction has been added by the increasing popularity of the new media, which has empowered viewers to instantly react to anything they view, and to 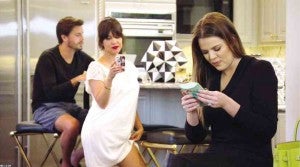 OTHER “Keeping Up” reality stars (from left) : Scott Disick, Kourtney and Khloe

swiftly communicate their reactions to the shows involved.

Thus, some programs now make room for viewers’ spontaneous comments, which “color” their development in so many new ways that the programs have become more self-conscious and unreal than ever.

It’s gotten so bad that some reality TV stars, like the Kardashians, have confessed that they now have a hard time separating their real existence from their hyped-up TV personas!

It used to be that stars behaved naturally behind closed doors and “performed” for the cameras only when they stepped outside. These days, however, reality TV cameras are all over the place in stars’ homes, so celebrities have to “perform” for them as well (except when they’re in the bathroom)!

So, where’s the all-important dividing line between private and public? Gone melodramatic, hyped up and manipulated—the way of all “reality” TV!