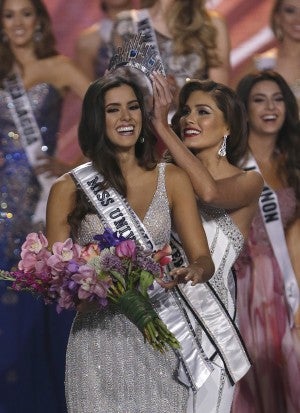 BOGOTA, Colombia — Carnival has come a few weeks early to the Caribbean city of Barranquilla where residents took to the streets on Monday to show their hometown pride after local beauty queen Paulina Vega was crowned Miss Universe.

Even President Juan Manuel Santos took time out during an official visit to France to congratulate Vega for her “historic” title Sunday night in Miami, where the 22-year-old business administration student beat out finalists from the U.S., Jamaica, the Netherlands and Ukraine.

“This demonstrates that in Colombia we have women who are intelligent, hard-working and perseverant in the face of obstacles,” Santos said. “They’re also very pretty.”

Colombians are obsessed with beauty and pageants are a major draw across social classes. But unlike neighboring Venezuela, which has won seven Miss Universe titles, Colombians are accustomed to falling short of the crown, with four runner-up appearances since 1992.

The only other Colombian Miss Universe is 76-year-old Luz Marina Zuluaga, who won the title in 1958. She told The Associated Press that Vega’s honor is long overdue.

“Like everyone else I’m very happy that a Colombian has finally won,” said Zuluaga, recalling how much the pageant had changed in the five decades since she was crowned. Bikinis weren’t yet a feature of the swimsuit competition and preparation for the gala event was almost nil in contrast to the industry of beauty schools, plastic surgeons and diction coaches that have sprouted up to prepare women for competition.

Vega’s hometown, the port city of Barranquilla, erupted in traditional cumbia music and dance as Colombian media descended on the city Monday in search of relatives and friends of Vega. The city of more than 1.4 million is known for hosting South America’s most-raucous Carnival after Rio de Janeiro every February.

It’s also the birthplace of two other globally distinguished beauties: singer Shakira and actress Sofia Vergara. Both took to Twitter in demonstrate their hometown pride over Vega’s title with their more than 35 million combined followers.

Pageants and performance run in Vega’s family. Her grandmother, Elvira Castillo, was Miss Atlantico 1953 (Colombia) and her grandfather is legendary tenor Gaston Vega.

But the contests leading up to Miss Universe were a first for Vega, who is one of eight children. She also said they would be her last, as she is eager to return to her business studies, saying in a post-pageant press conference: “It gives me independence. I want to have my own company.”

Real estate mogul and reality TV star Donald Trump, who owns the pageant, said many predicted Vega would take the crown a few weeks ago when contestants first arrived in Miami for the festivities.

“From the minute she walked in the building, people said, ‘She’s a star,'” Trump said.

Trump said Colombia was in the running to host next year’s pageant but noted China was also a strong candidate.

Vega’s win keeps the title in the hands of another Latina — reigning Miss Universe Gabriela Isler is from Venezuela.

As Miss Universe, Vega will receive an undisclosed salary, a luxury apartment in New York, a wardrobe and oodles of beauty products, and a one-year scholarship from the New York Film Academy.