No undies for Kate Hudson in Paris 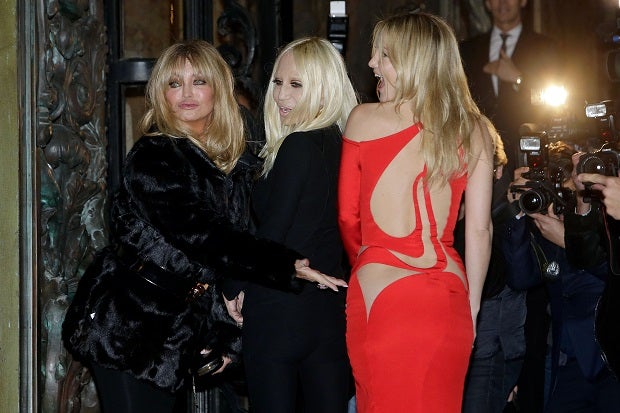 US actress Kate Hudson, right, presents to media her Versace that shows the absence of an underwear during the Atelier Versace Spring-Summer 2015 Haute Couture fashion collection in Paris, France, on Sunday, January 25, 2015. At left is Hudson’s mother, Goldie Hawn, and Italian fashion designer Donatella Versace. AP

PARIS, France — At Paris’ high-octane couture week, what happens on the catwalk is only half the story.

Academy Award winner Goldie Hawn and her daughter Kate Hudson made a surprise appearance at Atelier Versace in an atypical family night out in Paris. But the real frenzy didn’t start until the 35-year-old “Almost Famous” star turned her back to the paparazzi.

What was revealed — a very daringly-placed Versace cut-out — was a fashion coup Donatella could be proud of.

Here are the highlights and tidbits of the first day of haute couture collections, including show reports for Atelier Versace, Dior and Schiaparelli.

Underwear is so passé (ask Rihanna).

Hudson’s was just the latest name added to the list of stars to forgo underwear in the name of fashion.

The Oscar-nominated actress triggered hysteria by posing in a bright red cocktail dress from the new Atelier Versace Spring 2015 Collection with a cutout that demurely exposed her buttock. Knickers were nowhere to be seen.

Her mother dressed more prudently in a black long sleeve cocktail dress with crystal zipper details from this year’s Versace Resort. But Hawn didn’t let her 69 years get in the way of a good time — and was later seen hanging out with Donatella at the after party at which singer Ellie Goulding performed.

Donatella Versace played it relatively safe this season with a collection of gowns that explored primary colors and asymmetrical circular cutouts.

Knee-high stripper boots and split leg column dresses added the necessary dose of sexuality for the house famed for its unapologetic celebration of the “glamazon.”

Though the first looks lacked the accustomed exuberance, Donatella found her footing with a series of shimmering black disc gowns that seemed to evoke the vintage ’90s heyday of her late brother, Gianni, who was murdered in 1997.

Dior’s back to the future

With “Star Wars” actress Natalie Portman in the front row, the space-age theme — as imagined from the climate of the 1960s space race — was particularly prescient at Dior’s show.

White scaffolding held in place silver-mirrors that constricted guests like in a spaceship, and designer Raf Simons called his couture show “an alien journey through the past’s ideas of the future to reach the point of today.”

The thickly embroidered paillette body suits in stripes evoked how observers in the Sixties imagined what space-age fashions might be — as Russia battled with the U.S. for dominance in space during the Cold War.

But there was no nostalgia is this vibrant collection — it was replete with irony and fun.

One of the best details was the hair. Model’s hair was collected in a chignon, from which a hoop hung, holding in place a disembodied cosmic fake blond ponytail.

Barbarella would be proud.

It’s dangerous ground to tread on to compare designers to one another. Yet trans-pollination is ubiquitous in Paris.

So I’ll say it: There was more than an echo of the age-old Parisian house in the Italian designer’s Monday show in its full skirts, large peplums with echoes of the Fifties, diaphanous tulle and floral embroideries.

But they were only echoes. Valli owned the styles completely, and with a more muted pastel palette — he stunned with the most ambitious couture-work seen all day.

Elizabethan ruffs pushed the silhouette in a northern direction from the neck, or brought it down with net visors that covered the top part of the face and Fifties head bows.

It’s coming up to 4 years that 48-year-old designer has been creating couture. Understandably his show is among the calendar’s most eagerly awaited.

Schiaparelli’s couture show went back to the light artistry that the couturier, Elsa, was famed for — and improved in focus, following the departure of the more heavy-handed designer Marco Zanini.

The two-piece menswear tuxedo that opened the show — diaphanous yet authoritative — set the period: the Katherine Hepburn of the glamorous Thirties.

And the deceptively simple burnt orange leather coat that exploded on its back with a giant effervescent bow, and 3-D heart appliques stabbed with pins, set the tone.

Carla Bruni, on the front row, gasped in delight.

After two off-seasons, the subtle, playfulness of “Schiap” — the formidable rival of Coco Chanel who befriended surrealist Salvador Dali, invented shocking pink and gave the world the lobster dress — was truly back after her 60 year sleep.

The design team built on the creative skeleton Zanini had started to trace, but gave it true style.

A sharp black bolero cut a dashing silhouette, and a Golden Oldie emerald green satin dress featured embroidered hands on the back, as if the model were slowly being undressed.