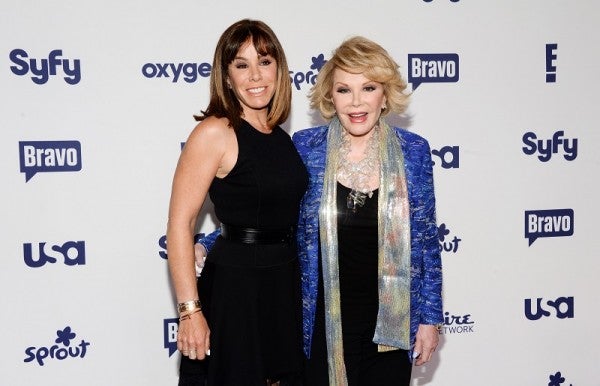 In this May 15, 2014 file photo, Melissa Rivers, left, and Joan Rivers attend the NBCUniversal Cable Entertainment 2014 Upfront at the Javits Center in New York. Melissa Rivers filed a malpractice lawsuit Monday, Jan. 26, 2015, against doctors and the clinic where her mother Joan Rivers had a routine medical procedure, stopped breathing, and later died. Rivers said in a statement that filing the suit was one of the most difficult decisions she had to make. AP

NEW YORK—Melissa Rivers filed a malpractice lawsuit Monday against doctors and the clinic where her mother, Joan Rivers, had a routine medical procedure, stopped breathing and later died.

Rivers said in a statement that filing the suit was one of the most difficult decisions she had to make.

“What ultimately guided me was my unwavering belief that no family should ever have to go through what my mother, Cooper and I have been through,” she said, referring to her son. “The level of medical mismanagement, incompetency, disrespect and outrageous behavior is shocking and frankly, almost incomprehensible.”

She said her mother deserved better.

Joan Rivers, a comedian who crashed the male-dominated realm of late-night talk shows and starred with her daughter on E! in “Fashion Police,” died Sept. 4 at age 81. The city’s medical examiner found that she died of brain damage due to lack of oxygen after she stopped breathing during an endoscopy at Yorkville Endoscopy days earlier. Her death was classified as a therapeutic complication.

A message seeking comment that was left with the clinic’s manager was not immediately returned.

The lawsuit said doctors mishandled the endoscopy and performed another medical procedure called a laryngoscopy on her vocal cords without consent. The suit said the doctor left the operating room to avoid being caught.

“To put it mildly, we are not just disappointed by the acts and omissions leading to the death of Joan Rivers, but we are outraged by the lack of care and concern for Ms. Rivers on the part of her treating physicians and the endoscopy center where the treatment was rendered,” said her attorneys, Jeffrey Bloom and Ben Rubinowitz.

A federal investigation, ordered by the federal Centers for Medicare and Medicaid Services, found the Yorkville Endoscopy clinic made several errors, including failing to keep proper medication records and snapping cellphone photos of Rivers while she was unconscious. It also found the Manhattan clinic failed to get informed consent for every procedure performed and failed to record Rivers’ weight before the administration of sedation medication.

The clinic submitted a lengthy plan for fixes, but the changes weren’t good enough and the federal agency said it would revoke accreditation unless it was in better compliance by March 2.

Yorkville Endoscopy said in a statement it was not appropriate to comment on the lawsuit. It extended condolences to the family.