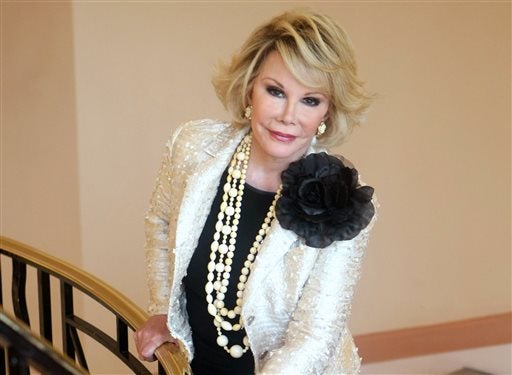 NEW YORK—The New York State Health Department is investigating the circumstances that led to the death of Joan Rivers, the iconic and legendary comedienne, a state official said on Thursday.

Spokesperson Judy Katz said the cause of death had not yet been determined.

Rivers, the raspy loudmouth who pounced on America’s obsessions with flab, face-lifts, body hair and other blemishes of neurotic life, including her own, died on Thursday in Manhattan. She was 81.

Rivers had been in Mount Sinai Hospital since Aug. 28, when she reportedly stopped breathing during a routine medical procedure on her vocal cords at a clinic in New York.

Her daughter, Melissa Rivers, said on Tuesday that her mother was on life support and on Wednesday, that she was out of intensive care.

“It is with great sadness that I announce the death of my mother, Joan Rivers. She passed peacefully at 1:17 p.m. surrounded by family and close friends,” Melissa said.

Melissa and grandson Cooper had kept a vigil at Rivers’ bedside since flying in from Los Angeles as soon as she fell ill.

“My mother’s greatest joy in life was to make people laugh,” Melissa said. “Although that is difficult to do right now, I know her final wish would be that we return to laughing soon.”

Celebrities, including many younger female comics who followed her onto stages once dominated by men, raced to pay tribute to her rapier wit as their inspiration and to express their condolences.

“A legend, a friend, a mentor, an icon and wildly funny. One of a kind. RIP,” said fellow comic Kathy Griffin, tweeting a picture of herself with Rivers.

In Los Angeles, a scrum of tourists and journalists gathered at Rivers’ star on the Hollywood Walk of Fame where flowers were laid.

Israeli Prime Minister Benjamin Netanyahu extended heartfelt condolences for the loss of an icon who brought laughter to millions around the world and was a vocal supporter of Israel.

The daughter of a well-off Jewish family, Rivers enjoyed a stunningly successful career that lasted decades and worked right up until falling ill last week.

Born Joan Alexandra Molinsky in Brooklyn, she graduated from New York’s Barnard College and worked in the fashion industry before starting out in stand-up comedy under the stage name Joan Rivers.

The contemporary of Woody Allen and Bill Cosby spared no one her razor-sharp wit and was considered one of the best at delivering a cutting one-liner, and perhaps the most foul-mouthed of a breakthrough generation of US “comediennes.”

Her signature catchphrase was “Can we talk?”—an icebreaker she used before verbally drop-kicking the object of her ridicule.

She told an interviewer that she thought it up while on the stand-up circuit in Las Vegas during the 1980s.

The joke at the time, she said, “was probably about Elizabeth Taylor being fat, and people gasped and I went, ‘Can we talk here?’ “What you’re really saying is, ‘Come on, are we going to talk the truth?’”

Tough and tenacious, she supported herself for years with secretarial work until she got her big break on the popular “Tonight Show” program with Johnny Carson in 1965.

Four months after landing a regular gig, she married one of the show’s producers Edgar Rosenberg. They had Melissa in 1968.

In 1986, she hit the big time with a $10-million contract as host of the new Fox network’s weeknight entry, “The Late Show Starring Joan Rivers,” competing directly with her old benefactor. In 1990, she won a Daytime Emmy in that category.

Then came a series of devastating professional and personal setbacks. She was shunned by Carson, who said that she had never informed him of the Fox offer and who apparently considered her disloyal for accepting it. She insisted that it had had nothing to do with loyalty, and that Fox had wanted her because her ratings were higher and her demographics younger than his.

After less than a year on the air, she was fired by Fox when her ratings slumped. Her husband and manager fell into depression after a heart attack and committed suicide in 1987. Rivers became estranged from her daughter, Melissa. Bookings dried up, and her career seemed to be on the rocks.

Rivers used to say that no subject was off limits in her comedy: Not even her husband’s suicide in 1987.

On Nancy Reagan’s hairdo: “Bulletproof. If they ever combed it, they’d find Jimmy Hoffa.”

On Charlton Heston: “He told us, ‘I got Alzheimer’s.’ Surprise! He’s been wearing his wig sideways for 19 years.”

On Donatella Versace: “That skin! She looks like something you’d hang off your door in Africa.”

On Queen Elizabeth II: “Gowns by Helen Keller.” “Nice looking. Not at all like her stamp. Wears her watch over the glove, though—tacky.”

“That’s how I get through life. God has given us this gift of humor,” she told New York Magazine. “Animals don’t laugh.”

In her 2013 book “I Hate Everyone … Starting With Me,” Rivers joked about her own funeral, saying she wanted “a huge show biz affair” with Meryl Streep “crying in five different accents.”

But she also sparked controversy over the years with outspoken remarks on the Middle East and, on one occasion, when the butt of her humor was the survivors of the 9/11 terror attacks.

In later years, Rivers became as well-known for her love of plastic surgery, taken to excess with her exaggerated cheek bones and her preternaturally wrinkle-free face.

She reinvented herself as the host of “Fashion Police,” a show that offered running critiques of the red-carpet attire worn by the glitterati at the Oscars and other A-list events.

US media reported that her funeral would be held on Sunday at Temple Emanu-El synagogue in New York.

“She demonstrated 30 years ago that a woman could be a competitive player on a late-night show,” he told AFP.