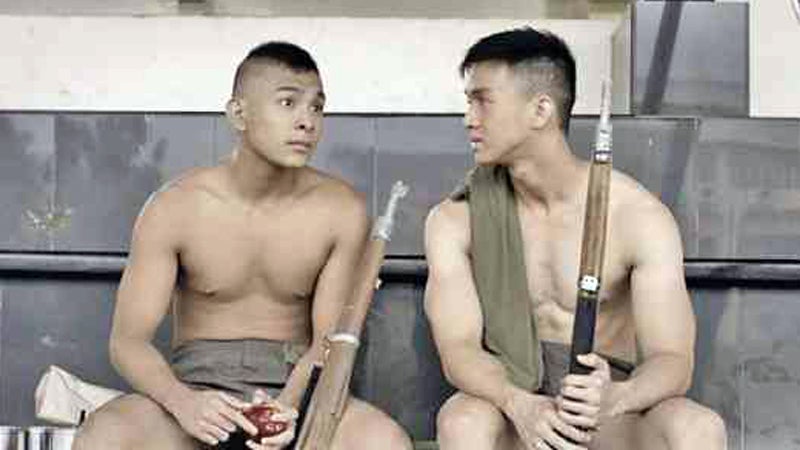 Trial and error. This was how filmmaker Kanakan Balintagos summed up the journey of bringing his script, “Esprit de Corps,” to the big screen.

The road to a digital film festival like Cinema One Originals is often fraught with all sorts of hazards and hurdles—on top of which Balintagos chose to make things more arduous with complicated shots and scenes.

“My main challenge was finding the perfect cast to pull off scenes shot in one long take,” he said. His film, one of 10 entries in the 10th edition of the festival, has four such sequences.

Most mainstream actors who auditioned for roles were reluctant to get military haircuts.

Balintagos nearly threw in the towel at one point. He complained, “The indie scene has become tainted, overrun by fame [seekers], demanding managers and financiers who are like vultures. They have no respect for the director’s vision.”

He longed for the innocent days of the indie scene. “I remember ‘Ang Pagdadalaga ni Maximo Oliveros’ (his feature directorial debut) a decade ago and how pure it was.”

The solution to his dilemma turned out to be a no-brainer; he went back to basics. “I cast nonfamous theater actors and a brilliant newcomer.”

He compared the shoot to a theatrical production. “We had long readings, rehearsals. It was like a marriage of theater and film. When we started shooting, the unimaginable long scenes were each achieved in just two takes. The long rehearsals paid off.” 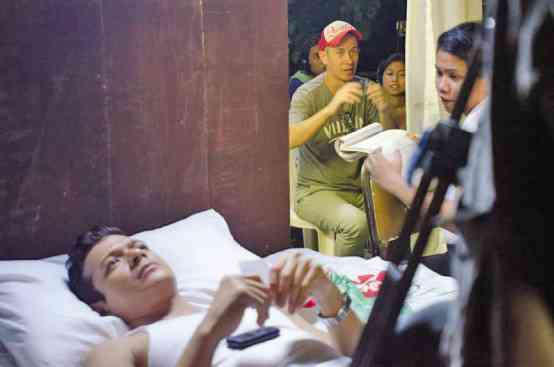 JERICHO Rosales was a trouper, like the rest of the “Red” cast, says director Jay Abello (center). Aih Mendoza/facebook

He had nothing but praise for the cast. “Sandino Martin is sensitive and intelligent. JC Santos, who took over another actor’s part, was a quick study. Garry Lim was a joy to work with. I saw Lharby Policarpio as my male Gong Li—it was amazing to see a newbie like him blossom into a committed artist.”

After shooting one dramatic scene, the whole cast and crew were in tears. “I couldn’t stop crying,” Balintagos admitted. “My wonderful assistant director, Karla Pambid, suggested that I take a break to cry it out.”

But the show must go on and he must set a good example and so, tears streaming down his face, Balintagos started rehearsing the next scene.

“It was a fantastic experience,” he gushed. “Everyone felt fulfilled at the end of every shooting day.”

The shoot for Jay Abello’s Cinema One entry, “Red,” was similarly marked by highs and lows.

As in all indie productions, Abello and his staff often found themselves grappling with time constraints. He recounted, “We would have a few more scenes to shoot but the sun was about to set or rise. How did we overcome that? We didn’t. We just accepted the limitations and moved forward.”

He crossed his fingers and prayed that “smart editing and other post-production tricks” would save the day for his film.

Fortunately, he was “blessed with a great cast,” led by Jericho Rosales, Mercedes Cabral, Mylene Dizon, Nico Antonio and Bibeth Orteza. “They were troupers,” Abello said. “We embraced the difficulties and enjoyed the process of creating this weird film.”

At the end of each work day, “We felt like kindred spirits … free-falling, but with a smile on our faces,” Abello said. 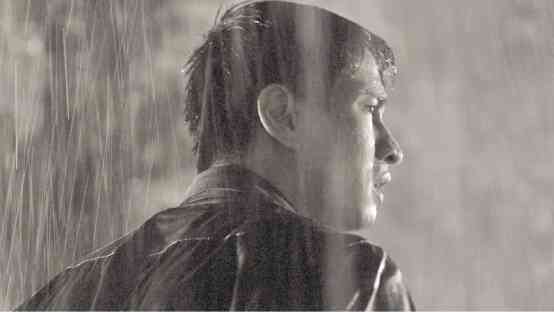 Balintagos’ movie was based on a one-act play that he wrote in a workshop when he was 17.

Abello was inspired by a scene in David Fincher’s “Fight Club” and his own brush with rumor-mongers.

In making “Violator,” Dodo Dayao was motivated by the desire “to make the ultimate found-footage film.” He didn’t quite attain that goal he said, “because the film transformed into something else.”

He surmised that hours of playing the video game “Silent Hill” and a real-life hit-and-run incident likewise pushed him to make “Violator.” He compared the shoot to a “full-on party, only hotter.”

The team encountered “the usual technical glitches and scheduling snafus” which they surmounted with “a knack for quick thinking and good luck… but mostly luck.”

“From the get-go, we were stunt-casting, meaning, we went out of our way to not cast the usual suspects,” Dayao said. “It took some serious wooing to convince some of the ensemble members to [jump on board] but we got everyone we wanted.”

The experience validated him. “It proved that our instincts were spot-on. The cast, in a word, was magic.”

The Cinema One Originals fest is ongoing until Nov. 18 at Fairview Terraces, Glorietta, TriNoma, and Greenhills Dolby Atmos theaters.