If one happens to study in an exclusive Catholic school for boys, he must not be fooled. Within its hallowed walls, everything is never as it seems.

This is just one of the subtleties, Director Kanakan-Balintagos (Auraeus Solito’s tribal-spirit name) wants to plant in the minds of his viewers as he weaves together the personal tales of two student cadets and their senior officer in his latest film “Esprit de Corps”, an official entry to 2014 Cinema One Original and rooted from the first play he wrote at age 17.

Reminiscent of the Marcos’ dictatorship a few decades ago, when military training was compulsory to the students, Private Cain Fujioka (Lharby Policarpio) and Private Abel Sarmiento (Sandino Martin), spend the remaining weeks of their ROTC training in arduous assignments and exercises. Subjecting them to their ignominy is Major Mac Favila S3 (John Carlo Santos), the stern training officer who wields power with his endless shouts of jogs, push-ups, and sit-ups.

Kanakan makes it easy for viewers to digest the film for it gives the palpable premise of the movie early in its onset—Privates Cain and Abel, good friends (or more than friends) are vying for the position Major Favila holds. At their leader’s behest, they will do what it takes to get it.

But it seems the unexpected revelation among the three is what slugs them squarely in the face. 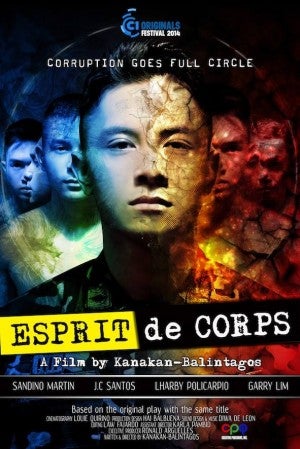 Behind the dim veil of the bravado image lurks the blatant, naked truth—something they couldn’t readily admit even to themselves.

A figurative language on screen

As part of the tradition, Maj. Favila needs to test the trainees’ courage, commitment and discipline. The interrogation room, where most of the main scenes transpire serves as his forlorn hell. And it is up to Privates Cain and Abel to turn it into a maniacal heaven.

Esprit de Corps is a figurative language on screen where viewers get to perceive a clever amalgam of irony, allusion, paradox and allegory.

It is completely laudable of Kanakan to capsulize the film’s essential meaning into only five major scenes. It doesn’t need to be stretched to its full length just to establish and develop its narrative essence.

Kanakan pens his opus using short, sharp and smart dialogues while meshing it with his characters’ staunch but troubled and confused personalities.

In a moment, one may feel that no sooner does “Esprit de Corps” begin than it transfigures into an obvious phantasm: the actors, in full character, treading back and forth, to and fro, across a theatre stage.

A good deal of entertainment the episodes give stickily secure the audience to their seats, but Kanakan’s penchant for humor is just a drop in a bucket.

Maj. Favila, whose stone-hard physique and attitude makes him an ultimate cadet idol, manipulatively changes the game of probe to game of seduction. That make-or-break moment when he waits if Privates Abel and Cain would give in to his earthly desire is the crucial point, that very fuel which revs up the crux of the storyline.

One may say that Santos’ portrayal gives justice to his role. He manages to embody Maj. Favila obscure personality. He realistically mimics the responsibility of a true training officer, bombarding the two cadets with tricky questions in booming voice and bold posture.

Maj. Favila’s pent-up angst and guilt hint a lot about his ambiguous whims and caprices. His corruption-laden actions mirror that of perverted system and hierarchy adopted by his current Commandant Abanilla (Garry Lim).

The way Private Abel plays the game with his tormentor lends the film a tenacious foothold. His self-aggrandizing hubris, will and gut are quite admirable. While the reserved and innocent features of his face betray his true nature, he effectively put up a transparent bluff before Maj. Favila to get the position he aspires for.

Sandino Martin’s performance could have improved more if he imbibed by heart Eugune Domingo’s “no-acting acting” chops. Nonetheless, the mesmerizing spell he evokes during his pool scenes seems to liberate his dingy, repressed feelings. 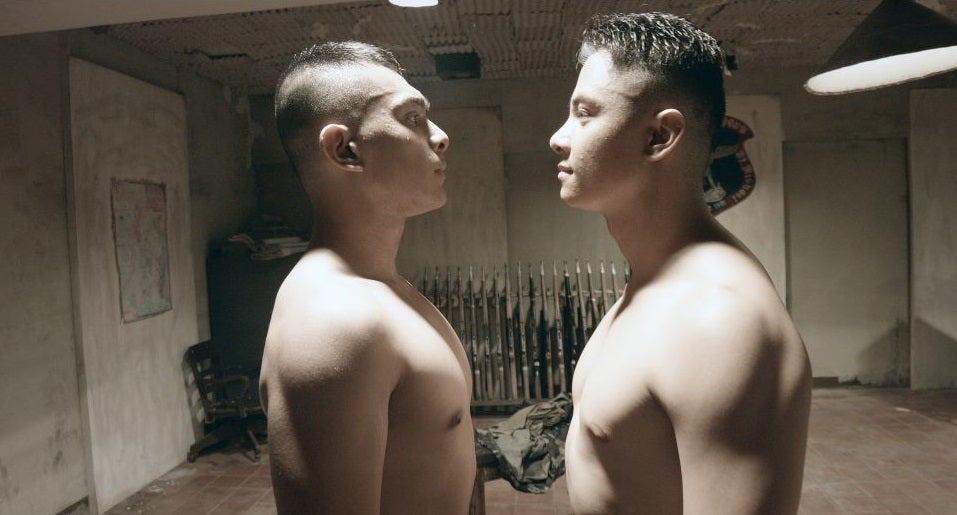 It seems the actors’ shedding of flesh is required to be a helpful mnemonic for the viewers to grasp the film’s core. Kanakan incorporates the philosophy of nakedness, the crossroads of the sacred and the profane, in such a very profound way.

It is ironic that in one scene Private Abel tackles with Private Cain his musings about nudity and lust, when he himself is afraid of baring his entire soul to the world. But he knows exactly what he’s doing, for he successfully claims his prize in the end. Indeed, donning the clothes of hypocrisy comes in handy sometimes.

That memorable moment, when Private Abel fixes his eyes on the camera as if talking to the audience, speaks it all: Everything is just like a movie, a fiction, an imagination, an illusion.

Kanakan slaps us with the bitter realization that a man will do anything for power, even if it means hiding his true self—a stingy antithesis to what Commandant Abanilla spits out during the cadets’ war games: “Nakedness is the best concealment.”

It is really interesting that the movie’s mystical and biblical elements could push people to conjure their own interpretations of the enchanted scenes like the eerie appearance of “Diwata” (like it’s Private Abel’s saving grace to prove his manhood) and the use of a colossal tree (like that one in the Garden of Eden) where Privates Abel and Cain succumb to the trappings of love.

With the uncertainties hounding the future of the three boys in the story, only one thing is for sure—Esprit de Corps is a must-watch. 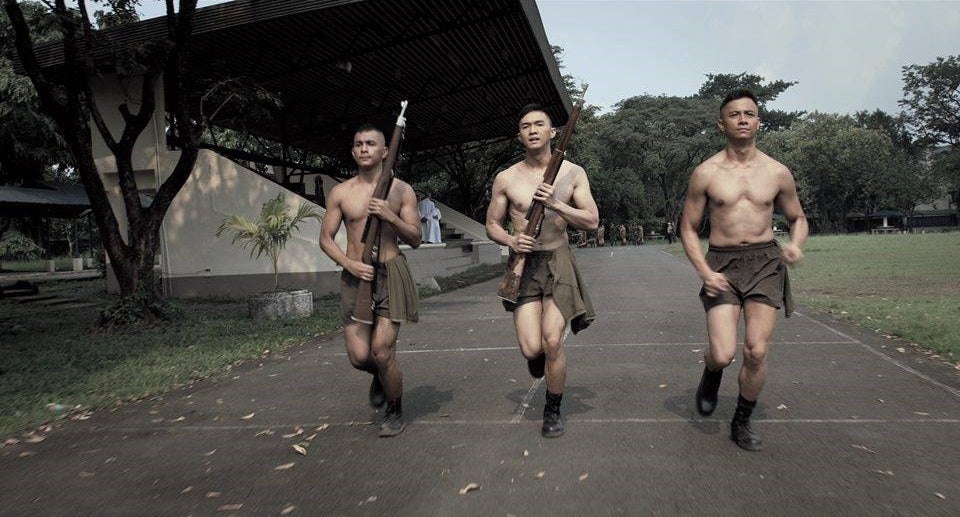 DSWD: No irregularities in tapping Starpay for aid