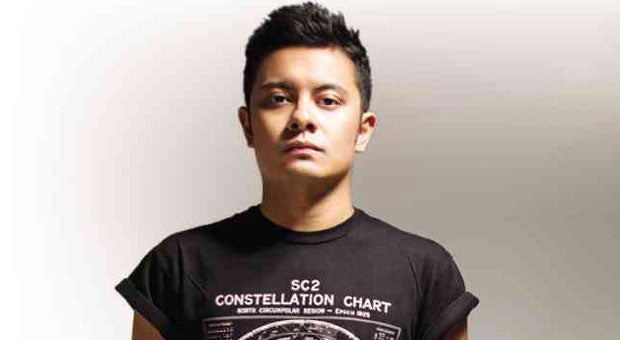 “THIS is who I am,” says Paolo. “I’m not just trying to be different.”

Singer and concert director Paolo Valenciano’s pursuit of heavy rock music was not a deliberate effort to separate himself from his father, Gary, one of the most celebrated pop artists in the local biz.

“It just felt right,” said Paolo, vocalist of the rock group Salamin, launched in 2004. “Whenever I do numbers for ‘ASAP,’ I feel like I’m trying so hard to do something that’s not for me.”

His comfort zone, Paolo said, was playing casual gigs with his band in small bars and exploring the underground scene.

“When I sweat and feel the pain in my neck after doing one such show… it’s almost gratifying. This is who I really am,” he told the Inquirer in a recent interview. “I’m not just trying to be different.”

He admitted that he has never conquered his nerves before, or while, performing on television. “I fake my confidence, which actually works,” Paolo said, laughing. “I just tell myself that I can do it, and I start believing it. After the performance, I revert to being a nervous wreck.”

But, he insisted, “I have no such jitters when playing with my band.”

Since Salamin is not as active as it once was—with the other three members embarking on personal projects—Paolo figured this is the perfect time to step out of the box and work on a solo album.

“The band has always been my security blanket. Now, I want to challenge myself and try something new,” said Paolo, who recently released “Silence/Noise” (Star Records) which, he said, was influenced by the music of such bands as Explosions in the Sky, Coldplay and Sigur Rós.

He pointed out that the album title reflects the two sides of his music career: the one in front of the camera, and the one behind it.

“In the afternoon I would be in ‘ASAP,’ doing numbers that my father typically does. Then we would perform in a rock event and the people—especially the older ones—would be surprised because the music was not what they expected.”

“Silence/Noise” is an “introspective” (his word) six-track record that features three of his own compositions (“Pangako,” “Kislap” and “Parusa”); a cover of After Image’s “Tag-Ulan”; “Muling Magbabalik” by his friend Zel Bautista”; and his favorite, “Hanggang Kailan Kita Mahihintay,” by former Sugarfree frontman Ebe Dancel.

Asked about his father’s input, if any, in the album, Paolo said, “He was more involved when I worked on the songs for my band. It was a different story with my solo album— not that I was consciously trying to avoid him, I just wanted ‘Silence/ Noise’ to sound like… distinctly me. I don’t want the people to hear it and say, ‘Oh, it sounds just like Gary V’s music.’”

Unlike his father and brother Gabriel, who both seemingly embrace the spotlight, Paolo shies away from it. He’s the kind, he said, who would rather go through the backdoor than step on the red carpet, when attending glitzy events.

But being from a popular show biz family, attention is something he just has to live with. “I didn’t even want my face to be on the album cover,” Paolo said. “I don’t see myself as a celebrity. I’m not in this for the fame, which I’m not comfortable with; I just want to make music,” Paolo said.