Winter’s wife has blues listening to his new album 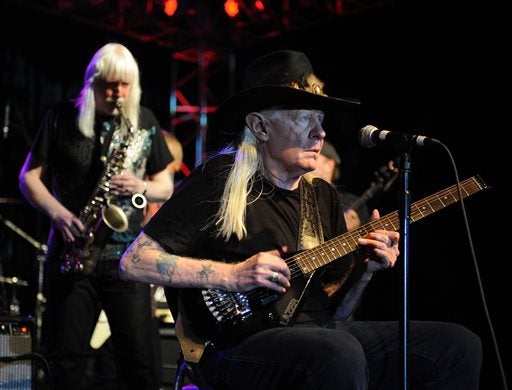 In this Aug. 26, 2012 file photo, Johnny Winter, right, and Edgar Winter perform during Hippiefest at the Seminole Coconut Creek Casino in Coconut Creek, Fla. Winter died in a hotel room just outside Zurich at age 70 in July 2014.  AP

NEW YORK — Johnny Winter’s wife says listening to her late husband’s newest album is bittersweet because it’s one of his best works but was released after his death.

Winter died in a hotel room just outside Zurich in July at age 70. He had just finished recording “Step Back,” an album of mainly blues standards. Released posthumously last month, it features Eric Clapton, Dr. John, Joe Perry and others.

“Step Back” was on top of Billboard’s blues albums chart for three weeks.

“It was going to do well on its own merits. This tragedy unfortunately has been coupled with it, but it was one hell of a comeback,” Winter’s manager, Paul Nelson, said in a joint interview with Warford Winter.

“We know it was breathing-related or lung-related. There’s no official statement yet. We haven’t requested the information yet, but he did have severe emphysema, that’s the information we have now,” he said. “They said it was no foul play. When something like that happens in a hotel, they immediately think Jimi Hendrix, they think Jim Morrison and all that’s going on — a musician, a blues guy, a rock guy, a guitar player, is this some kind of thing?

“… But then they realized it was far from that because then they knew the back story that he had been so clean for so long that they were like, ‘We see.'”

Winter, on Rolling Stone magazine’s list of top 100 guitarists of all time, was a leading light among white blues guitar players, including Clapton and the late Stevie Ray Vaughan. He idolized Muddy Waters and produced some of the blues legend’s more popular albums.

Nelson said Winter, who battled substance abuse, cleaned up in the last six years and it made him a better musician — and husband.

“He stopped drinking. We got him off the methadone. He stopped smoking,” he said. “He was doing physical therapy. The only thing that couldn’t have been fixed … he had emphysema for smoking too long.”

“It just got better and better. We started traveling more and enjoying everything more,” Warford Winter said.

“He said he always wanted a Grammy. He said he wanted to be in the Rock and Roll Hall of Fame,” Nelson said. “He said if he didn’t get a Grammy for this record, they’re nuts!”