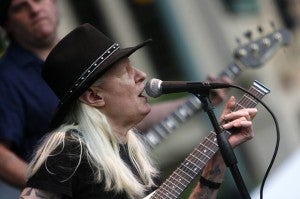 In this Friday, June 19, 2009 file photo, Johnny Winter plays during the Canton Blues Festival 2009 in downtown Canton, Ohio. Texas blues icon Johnny Winter, who rose to fame in the late 1960s and ’70s with his energetic performances and recordings that included producing his childhood hero Muddy Waters, died in Zurich, Switzerland on Wednesday, July 16, 2014. He was 70. AP/The Repository, Bob Rossiter

GENEVA – Texas blues legend Johnny Winter emblazoned himself into the world’s consciousness with his tattooed arms churning out lightning-fast guitar riffs and his striking long white hair flowing from under his cowboy hat.

His contrasting appearance and devotion to the blues pioneers of the 20th century turbo-charged a career in which he emulated and, ultimately, championed, his childhood hero Muddy Waters and other icons.

Blues and country singer Tracy Nelson described Winter’s sound as “Texas second generation.” “He did not overplay, like a lot of white blues guitarists,” she said of Winter. “His tone was a little more modern, more electric, but I could see the influences. He stayed faithful.”

Winter’s representative, Carla Parisi, confirmed on Thursday that he died in a hotel near Zurich a day earlier at age 70. The cause of death was unclear and authorities have ordered an autopsy, said Zurich police spokesperson Cornelia Schuoler.

Winter had been on an extensive tour this year to celebrate his 70th birthday. His last performance was on Saturday at the Lovely Days Festival in Wiesen, Austria.

John Dawson Winter III was born on Feb. 23, 1944, and raised in Beaumont, Texas. He was the older brother of Edgar Winter, who like him was an albino, and rose to musical fame with the Edgar Winter Group.

“I love playing guitar. It’s the only thing I’ve ever really been great at,” he said.

He was one of the most popular live acts of the early 1970s, when his signature fast blues guitar solos attracted a wide following. Crowds were dazzled by the speed—and volume—of his guitar playing, which had its roots in urban blues but incorporated elements of rock ’n’ roll. But his addiction problems with heroin during that decade and later battles with alcohol and prescription medication also drew attention.

He was inducted into the Blues Foundation Hall of Fame in 1988, and his devotion to the music never wavered.

“To me, the blues has more emotion in it than any other music I’ve ever heard,” Winter told Guitar World. “You can tell that the people who sing and play the blues mean what they are saying.” AP