Courtney hopes to start Kurt biopic next year, writing her own book 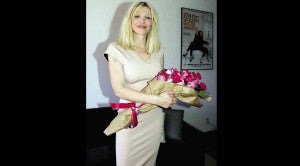 THE ROCK star doesn’t want the responsibility of casting the actor who will play her late husband but she will have “a say in it.” RUBEN NEPALES

LOS ANGELES – To conclude our two-part column on Courtney Love, we feature the musician-actress (the day after her birth anniversary) sharing details about a biopic on her late husband, iconic Nirvana frontman Kurt Cobain.

“The biopic should start within the next year or so,” Courtney announced.

Who gets to play the lead singer, composer and guitarist? “CAA (Creative Artists Agency) directly sent me actors’ (demo) reels,” she explained. “That was really tough because these boys are so pretty, so cute. I won’t name names because I don’t want to jinx it for anyone but these are 25-year-olds who are blond, gorgeous and the new Brad Pitts. There’s a ton of those. Some are really good actors, not just pretty faces.

“I don’t want to be the person who makes that decision,” she said on casting an actor for Kurt. “Let’s leave that to the agents; I have great agents now. But I will have a say in it.”

In the meantime, there’s this documentary on Kurt: “Brett Morgen, a documentary director, who did ‘The Kid Stays in the Picture’ and ‘Crossfire Hurricane,’ has done a Kurt Cobain documentary. He’s based it a little bit on the movie ‘Lenny,’ the one with Dustin Hoffman. It’s not like a ‘Behind the Music’ doc. The only people talking in it are (Nirvana bassist) Krist Novoselic, Kurt’s mother and me. It’s vérité,  mostly.”

Many folks want to come on board this doc, she noted. “I mean, really cool producers and I am friends with a few of them. I can’t have those friendships be contingent on whether [or not] I green-light them for that movie. Everyone wants to throw money at this (sic). Let the agency protect me from this. It’s really, really important. I am letting my agency decide a lot of things because I don’t want to be talking to some hot producer guy, make out with him and then have him go, ‘So, baby, do you own the rights?’ That has happened.”

Courtney is also flooded with all kinds of requests from young actors hoping to land the important role. “Some beautiful blond, tragic, gorgeous actor boy is hitting on me, and why? He wants to play Kurt. So I am moving that over to the agency side. I am not Cecil B. DeMille or anything like that. I don’t want to be the producer per se.”

But she wants to retain 100 percent control of the biopic. “I do have a say in it. So do Frances, and Krist and Dave (Grohl), for that matter, if it touches on Nirvana—and it will. I am leading the charge because it’s time to do this.”

Courtney is also excited about having a recurring pivotal role in “Sons of Anarchy” and grateful to the series’ creator. “I thank Kurt Sutter for taking a chance on me, bailing me out of actor jail, as we call it. It takes a showrunner like Kurt to have the balls to do that. It’s now up to me to make it. It’s different—it’s television.”

She fought to be acting again. “It’s about being relentless [though] not to the point of rudeness; you have to have the mojo to just get up, dust yourself off. I didn’t want to start acting again until 2012, when I saw a Sean Penn indie movie. I went to his agent and I went to him and I was like, ‘How do I get back into this business?’”

Courtney recounted what happened when she shot her first scene for “Sons of Anarchy”: “I am pretty comfortable in my own skin but I will tell you that the other day, my first time to act in 11 years, I choked on the first master take. I just choked. I was trembling. I thank God I was across from someone as good as Katey Sagal. She hugged me and I got into her vibe. Every take got better and better. I don’t choke, man! And I choked! And I am not on anything.”

She continued: “I can’t tell you what [projects] I passed on; you would freak out. Some of it was crap, but most of it was either blockbusters or stuff that won Oscars and Golden Globes. I wasn’t ready for it. Milos (Forman) told me it was going to happen, but I just fell apart.”

Courtney volunteered a less-known phase in her life: “I dated Edward Norton for some time. That’s an amicable friendship now. Everything is good. We had very different upbringings. He’s Edward Norton Harrison the Fifth. He went to Yale, and I am Courtney Love from Juvenile Hall.

While she’s back collaborating with Hole’s original guitar player, Eric Erlandson, Courtney ruled out a reunion concert tour with the band. “I don’t want to get on the oldies circuit,” said the singer-actress who just released “You Know My Name,” a new single. “I don’t need to do that for money. I want to put out music that is relevant today. [Being] one of the last chicks in a rock ‘n’ roll band is a weird place to be. It’s scary not to be selling out. I got presents from my mentors, Bono and Michael Stipe, yesterday. I have a heavy mentor-near disciple relationship with Bono and Michael Stipe.

“I got presents from them yesterday. I looked at the year on the bottle of wine from Bono. It was my birth year; I couldn’t believe it. I was like, holy moly! It’s tough to put Hole back together and make sure that it’s relevant.”

She enjoys mentoring female musicians in turn. “I have mentored a lot of women and watched them do really well. I have a close relationship with Florence Welch (Florence and the Machine). I don’t even know if Adele knows this, but I passed her demo to someone who blogged it and it got a huge amount of attention. I always have my ear out for deep girls, up-and-coming girls.”

She dished about a fellow musician. “I dated him, trust me. He doesn’t mean to be mean. He’s just mean. Until he lets go of his resentment, he’s going to stay mean. He’s kind of in rock ‘n’ roll jail. You have to let go of your resentments. You guys saw me and Dave Grohl hug at The Rock and Roll Hall of Fame. That was a genuine, real moment of letting a lot of, pardon my French, a lot of legal gunk, a lot of crap, go. Just let it go.”

About her troubled growing-up years, she reminisced, “I ran away, and I came back to San Francisco in the 1980s. I liked it, but I did a lot of drugs there.” With a grin, she joked, “If you tell anybody I did drugs, it will ruin my reputation, because nobody in this town knows that. Not a soul. I am begging you, don’t tell anyone I did drugs. I will be knocked off as America’s Sweetheart.

“My mother was adopted by these very wealthy San Francisco Italians. When they died, they left her a really large amount of money. I had a maid named Madell when I was growing up. Then my mother married a guy named Frank, a garbageman. They called him “the garbage Adonis” because he was so beautiful, a very handsome man. I was very confused about our socioeconomic status.”

She revealed another project: “I have a deal with HarperCollins for a book. I can’t tell everything but I can tell a lot. I have a compulsion to write. My grammar is terrible [but] it doesn’t matter to me. I write with a pen. It’s more emotional when you write with a pen, especially lyric poetry. I write couplets for a living—that’s what I do. I deal with my turmoil  ‘cathartically’ through lyrics and through performances.”

We asked about her other dreams. “I want to see my daughter blossom, and I can’t wait to be a grandmother. That’s probably five or six years off. The reason I moved back in LA was to be closer to her, and also to get an agent to start acting again. I spent the last five years in New York. I was kind of like a socialite, sort of a rock star half the time, going out a lot. And I had to move back here and get serious.”