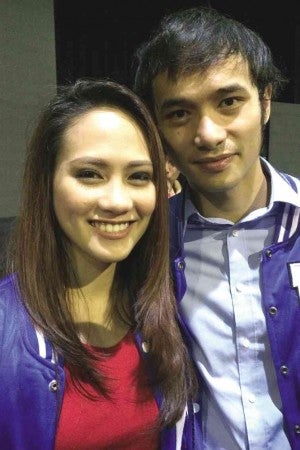 The decades-old Music Museum was the perfect venue for the gig “Happy Together,” featuring rock musicians Kean Cipriano of Callalily and Eunice Jorge of Gracenote.

The concert was held in support of the duo’s latest album of the same title, a compilation of renditions of their favorite classic songs from the 1960s and ’70s.

The youthful energy was palpable that night as the theater slowly filled up with young people—mostly women who looked like they were in their teens or early 20s—and their parents or guardians.

It was a merry mix of people of all ages.

A video presentation of Jorge singing her version of the ’60s hit “To Sir With Love” started the show.

The music video told the story of a girl (played by Jorge) who had just finished high school and was excited about her first day in college.

Shrieks from the back of the hall followed: Cipriano was entering the stage from one end of the theater, performing “Can’t Take My Eyes Off Of You.” It was then revealed in the video that the two met on the first day of their freshman year and were instantly attracted to each other.

The singers eventually met on stage and started performing the song complete with backup dancers and props. It became clear that the story line was inspired by the lineup of songs in the album. 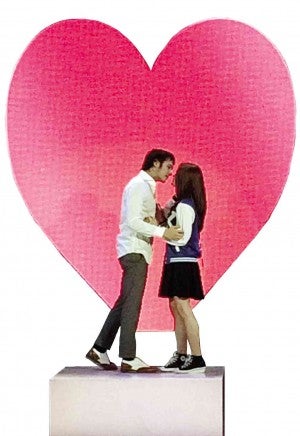 THE SINGERS surprised the audience with a smack.

Apart from having a live band and backup dancers, there were also costume changes and different set designs to match the songs. Video presentations were employed to create a more theater-like viewing experience. Skits from comedian Ramon Bautista, who gave humorous advice on love, were featured, too.

Cipriano and Jorge both gave strong performances in duets and solo numbers. Their performance of the album’s title track was as fun as the original version, eliciting cheers.

Cipriano, however, shone more prominently in his solo performances. His “Never My Love” was sincere, while his take on Rod Stewart’s “You’re in My Heart,” though missing a few of the high notes, was heartfelt.

“You’re an essay in glamour/ Please pardon the grammar/ But you’re every schoolboy’s dream,” crooned the rocker, displaying his softer side.

The “conflict” in the show ensued when Cipriano started singing “How Can I Tell Her?” which revealed that his character had another girlfriend. “We can talk of tomorrow, I’ll tell her things that I want to do/ But girl, how can I tell her about you?”

Jorge, of course, was “outraged.”

The show required acting skills, which both singers have.

Showing off his vocal prowess, Cipriano then gave a powerful, albeit cheery, performance of James Taylor’s “Don’t Let Me Be Lonely Tonight,” while dancers sashayed with umbrellas.

Jorge’s heartbroken character, seeing nothing on TV but Cipriano’s face, then declared her lasting love for him despite everything by singing a happier, more hope-filled rendition of Paul McCartney’s “My Love.”

They reconciled with Dave Clark Five’s “Because,” their version more upbeat and updated, so the performance felt fresh.

The couple ended the number with a quick smack on the lips, surprising everyone, including themselves, and driving the audience crazy.

Ending a little after an hour, the show was capped by their performance of “Islands in the Stream,” popularized by Kenny Rogers and Dolly Parton.

The performers’ young fans were ecstatic after the show. “We’re happy to see Kean and Eunice live on stage,” said 18-year-old Alyssa Arjona, who came with her cousins to watch the concert.

Read Next
Kylie Padilla: The daughter comes into her own
EDITORS' PICK
Shop smarter with vivo’s big 12.12 holiday deals
House energy committee chair Arroyo bats for cheap electricity
How not to retire as an ex-president
Lawmakers eyeing more changes in Maharlika plan
Hidilyn Diaz wins only gold missing from her collection
The vivo Y02 is now available in the Philippines for only PHP 5,299
MOST READ
Jovit Baldivino, ‘Pilipinas Got Talent’ winner, dies at 29
Singers, fellow colleagues pay tribute to Jovit Baldivino: ‘Isang kapatid sa pag-awit’
LPA enters PAR, to likely strengthen into tropical depression in coming days – Pagasa
Andi Eigenmann, family in Manila for a quick visit; Ellie dines with grandma Jaclyn Jose
Follow @RCamongolINQ on Twitter
Don't miss out on the latest news and information.