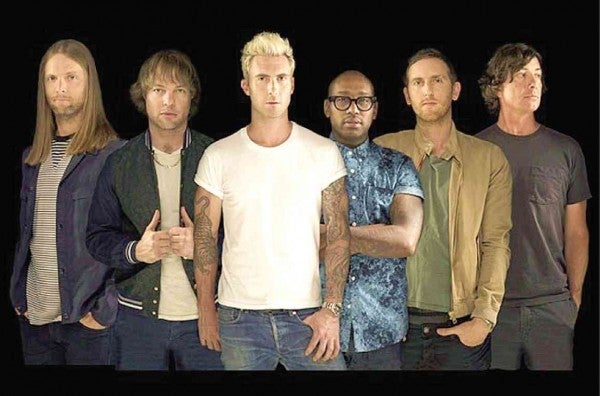 The guys of Maroon 5 aren’t shy about creating “musical moments” deliberately engineered to keep the group relevant on the pop-music scene. Is their cachet-boosting tack effective? Yes, especially if we go by the chart-topping successes of “Moves Like Jagger,” “Misery” and “Payphone.”

The songs’ themes revolve around love (“Coming Back For You”), sex (“Animals”), loss (the carrier track, “Maps”) and their complications (“In Your Pocket,” about a cheating lover). “My Heart Is Open” milks the tune’s romantic message (about taking chances) by having Levine sing it with his fellow judge on “The Voice,” Gwen Stefani, whose brash alto bewitchingly complements Levine’s falsetto-ready, tenor-countertenor vocal range.

The electronica-tinged “It Was Always You” derives its appeal from a “relatable” subject matter—about a guy who belatedly realizes he’s in love with his best friend, while the breakup track, “Unkiss Me,” impresses with its honesty and plaintive candor: “Unkiss me/ Untouch me/ Untake this heart/ And I’m missing just one thing—a brand-new start.”

If you’re partial to dance floor scorchers like “Moves Like Jagger,” the urgent licks of the Jamiroquai-channeling “Feelings” and the exhilarating bonus cut, “Shoot Love,” will make you sweat and keep you grooving. “Sex and Candy” benefits from Levine’s attention-hooking, bluesy cover of Marcy Playground’s 1997 hit.

The album caps off its radio-ready repertoire with the ballad, “Lost Stars” (from the soundtrack of “Begin Again”)—which is notable for its haunting melody and achingly beautiful lyrics: “God, tell us the reason/ Youth is wasted on the young/ It’s hunting season, and the lambs are on the run/ Searching for meaning/ Are we all lost stars trying to light up the dark?/ Turn the page, maybe we’ll find a brand-new ending—where we’re dancing in our tears!”