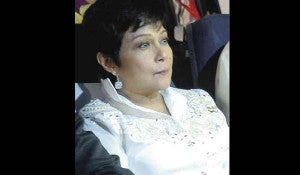 It was such a delight to interview my teenage crush, Christopher “Boyet” de Leon. How does it feel to be working with his ex-wife Nora Aunor after so many years?

“At first it was awkward,” said Boyet, who is teamed up with the Superstar on TV5’s “Sa Ngalan ng Ina.” “But we warmed up to each other right away. It’s a plus factor that our son Ian is with us in the series, which is more like a movie because of  the grandiose production.”

What makes it different from all the teleseryes he has done? “I portray a crippled man. So the whole time I’m in a wheelchair. It’s not easy to act when you’re confined to sitting down. It limits the way you can express yourself. So since it’s a first for me, it’s something worth watching, aside from my long overdue onscreen reunion with Guy.”

Didn’t his wife, Sandy Andolong, have apprehensions about his team-up with Ate Guy? “I have her all-out support. She knows it’s a once-in-a-lifetime project that I should not pass up.”

But there are some movies of his which he would rather forget. “When I chance upon some of my old films on TV, gusto ko sunugin lahat ng kopya ng pelikula na ’yon,” he said, laughing. “But that’s part of the process. All actors have good and bad projects.”

Boyet’s eyes lit up when he talked about his grandson. “I am a doting grandpa. Since my son and his wife are in the United States, kami ni Sandy ang nag-aalaga ng apo namin. It seems like he will follow in my footsteps because even at a young age marunong na umarte na a la action star.”

The award-winning actor is playing his lolo role to a hilt.

When Ate Guy and I finally met again, we hugged each other so tight and reminisced about the good old days with my mom. It almost felt like mom was with us that heartwarming afternoon.

Ate Guy told me she’s done shooting her movie and as soon as the taping of her dramaserye is over, she will fly back to the United States for awhile but will be back here for Christmas and the New Year.

La Aunor also clarified that she and her daughter Lotlot have no tampuhan. 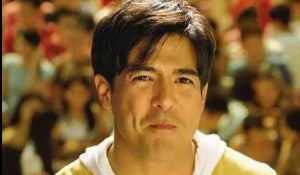 Aga Muhlach is ecstatic that his travel show on TV5, “Pinoy Explorer,” is generating good feedback and great ratings.

“It makes me do things I’m not able to do here,” he said. “It’s like a dream to visit places I’ve only read about in books. I am learning and earning at the same time.”

He personally requested Rowell Santiago to direct the TV series. “I like to work with someone I’m comfy with,” Aga says. “And since Rowell is also an actor and a close friend, we communicate well and have teamwork. I fondly call him Lolo Rowell. He’s such a perfectionist. Kahit okay na ang shot, gusto niya paulit-ulit pang take, but I don’t mind kasi para sa ikagaganda ng show.”

Will he be doing a teleserye, too? “I would rather reserve my drama performances for the silver screen,” he explains. “’Pag TV show kasi minsan madalian o chop-chop ang eksena sa taping. Sayang naman. For me, iba ang magic to watch myself acting in movies. With this new show, at least they get to see my fun side.”

Wherever Aga travels, he takes his own sunshine with him as he spreads his joie de vivre around so well.

Pinoys are in for a treat on Oct. 10 as three New Wave acts—Belinda Carlisle, Howard Jones and The Human League—perform their unforgettable 1980s hits live at the Smart Araneta Coliseum. Don’t miss this one-time concert (Call 911-5555). It will be one “senti” night of New Wave hits, which will surely bring back memories of that great era in music.