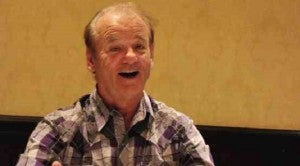 LOS ANGELES—“What are you drinking?” Bill Murray asked as he strode into a meeting room at the Fairmont Royal Oak Hotel in Toronto. It was Saturday afternoon, the peak of the Toronto International Film Festival.

“Let’s have a drink first, OK?” said the actor whose film, “St. Vincent,” made many journalists—both men and women—cry in a screening just two hours earlier. We’ll not spoil it for you, so we’ll just say there’s a scene that we challenge you not to be moved by.

But first, let’s talk about Bill’s alcohol of choice. “I don’t have a favorite drink,” said the man who many consider is the coolest in the universe.

“That is probably why I’m not an alcoholic,” Bill added. “I like alcohol, but I don’t have a favorite drink. If I had one, I would probably be a drunk, what you say? I like to have a different drink for a different mood.”

It’s always a good time to be Bill Murray, but last Sept. 5 was an especially good day to be the actor. Declared as Bill Murray Day by the Toronto fest, it was marked by screenings of several of his iconic films, “Groundhog Day,” “Ghostbusters” and “Stripes”—and the world premiere of “St. Vincent.”

“I was riding a bike around,” said the actor with the perpetually bemused look about how he spent the special day when he wasn’t on the red carpet or at the screenings. “People were going, ‘Hey, it’s Billy Murray Day!’ A lot of people were texting and saying what a good day it was.”

“Then, we had this movie (‘St. Vincent’) last night that people went wild for,” Bill said. “We went to a party, and there was a great disc jockey. It was full. It was a good day, man.”

In one of the best performances we saw in the Toronto entries, Bill plays Vincent, a curmudgeon who ends up being the after-school-hours sitter of Oliver (Jaeden Lieberher), the 12-year-old son of his new neighbor, Maggie (Melissa McCarthy).

An odd friendship develops between the boy and Vincent, a cantankerous guy who has a pregnant stripper for a girlfriend (an almost unrecognizable Naomi Watts in a memorable performance) and who frequents the racetrack, a strip club and a dive bar. Vincent becomes a paternal figure in the life of Oliver, whose parents are separated.

Bill invests his alcoholic gambler Vincent with humanity and pathos in the film, the impressive feature directorial debut of Ted Melfi, who also wrote the script. Chris O’Dowd (effective as Oliver’s priest-teacher) and Terrence Howard costar.

Credit must also go to Jaeden—a wonderful find—who landed the role from a field of about 1,500 candidates in auditions held over six months. Bill said that he and Jaeden did not meet until their first scene together, an inauspicious meeting of their characters.

“I can tell you that the kid is special,” Bill praised Jaeden, who started in TV commercials and debuted on film as the young version of Chris Evans’ character in “A Many Splintered Thing.” “He’s very self-composed. He is humble and earnest. He has big, wide eyes. He watches. He ‘sees’ everything you are saying. He listens a lot. He’s going to do great.”

Bill shared that, while he immediately liked Ted’s screenplay (which is based on moments in Ted’s life), he made some suggestions.

“But, the story is all coming from Ted’s real stuff,” Bill emphasized. “The execution of the scenes was delightful.”

Asked to share his memories of making “Ghostbusters,” which celebrates its 30th anniversary this year, Bill recounted, “When you had those uniforms on, you could do anything, because you looked like you were so legit. We would walk into stores and start examining people. We could do anything we wanted with those things!

“We also had the car, and we could drive with it. We never stopped at red lights. We drove in any direction we wanted. It was a lot of fun!”

Bill’s drink order—champagne—belatedly came at the conclusion of our chat. We toasted and sipped in honor of this man who’s still way too cool as he turns 64 on Sept. 21.