What will Deniece Cornejo, Cedric Lee do out of prison | Inquirer Entertainment 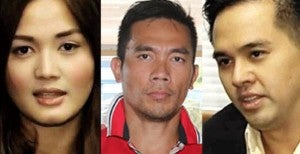 MANILA, Philippines— What will Deniece Cornejo and Cedric Lee do after they get out from their detention cells?

For Lee, it’s business as usual.

According to his lawyer, Howard Calleja, Cedric Lee will tend to his family and businesses.

“He will tend to his family and businesses,” Calleja said Tuesday morning in an interview with co-hosts Jake Maderazo and Arlyn dela Cruz on Radyo Inquirer 990AM, citing this is what Lee has been doing before he was detained.

He said the Taguig regional trial court (RTC) granting the bail plea of Cornejo, Lee and Raz is a “one step closer in getting justice.”

“It is one step to the right direction. One step further to proving the innocence of my client and also one step of showing to the truth of the incident,” Calleja said.

Lawyer Ferdinand Topacio, legal counsel of Cornejo, meanwhile said the 23-year-old model would go to “places of worship” and thank the Pastors who visited her during her four-month detention at the Criminal Investigation and Detection Group (CIDG) at Camp Crame in Quezon City.

“Iikutin niya ang mga churches ng mga Pastor na nagbigay sa kanya ng suporta, dumalaw sa kanya at nagbigay ng words of encouragement noong nasa kadiliman siya ng kanyang buhay (She will make the rounds of churches of these Pastors who gave her the support, who visited her and gave her words of encouragement during the dark days of her life),” Topacio said in the same program on Radyo Inquirer 990 AM.

He said Cornejo would call her family and friends to be able to comply with the P500, 000 bail bond.

“She will call her family and she has friends who will contribute,” he said.

Topacio addressed speculations that the serious illegal detention filed against Cornejo, Lee, and Raz were not bailable.

He said the burden of proof that the evidence is strong is with the prosecution.

The court, however, found out that the “evidence of guilt is not strong.”

The serious illegal detention case stemmed from the alleged mauling of TV host-actor Ferdinand “Vhong” Navarro in January this year.