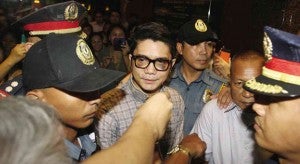 MANILA, Philippines – Television-host actor Ferdinand “Vhong” Navarro was dismayed and saddened by the decision of the Taguig regional trial court (RTC) granting the bail plea of his alleged assailants but vowed to fight back, his lawyer said Tuesday.

Mallonga said they would file a motion for reconsideration this Tuesday to contest the court’s decision.

“Marahil ay nasuntok kami sa prosecution pero tatayo kami (Perhaps we were outmaneuvered by the opposition but we will rise again),” she said, adding, “We have a right to question and we have a right to file a motion for reconsideration,” she added.

In its ruling, the court said the prosecution failed to provide evidence that the illegal detention was actually serious and for the sake of kidnapping.

According to the court, it was possible that Navarro was legally detained by the suspects, adding that the prosecution failed to provide clear proof that ransom was actually demanded.

Mallonga, however, maintained that a serious crime has been committed.

“We know that the evidence were strong and overwhelming,” she said.

She added that they respected the decision of the court but would avail of all legal remedies to overturn it.

“We are not going to insult the system. We are going to avail of remedies,” she said.