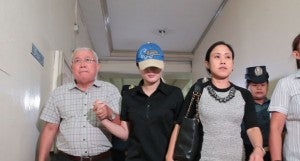 MANILA, Philippines—It is still not certain if she will be freed on Tuesday, but just the thought of her impending release from jail is already enough to excite Deniece Cornejo.

Cornejo, who accused actor-host Vhong Navarro of raping her, was all smiles after the Taguig Regional Trial Court found insufficient evidence in Navarro’s serious illegal detention case against her and allowed to grant her bail.

(My mind keeps wandering. Because of my excitement, I feel like I am floating on air.)

Cornejo said she expects to be released from jail on Tuesday, but admitted that she remains clueless if her camp has already raised her P500,000-bail.

Atty. Ferdinand Topacio, Cornejo’s lawyer in her serious illegal detention case, however, said their camp is still securing the documents needed for her release.

Cornejo is currently held at the Anti-Transnational Crime Unit detention center of the Criminal Investigation and Detection Group in Camp Crame. She shares the cramped cell with female human trafficking suspects.

Wearing no make-up, the 22-year-old model in a brown sweater and jeans ‎said that‎ it was her faith that helped her get through her ordeal.

“It’s 100 percent faith. It’s not the judge, not the decision, not the evidence, it’s my faith that saves,” she said.

When asked what would be the first thing she would do when she goes out of the Crame cell, Cornejo said she would go to the church and pray.

In her almost four months in jail, ‎Cornejo shared that her detention was “just like an immersion.”

“But I also learned how to adjust to ‎my environment, na ikaw ang mag-aadjust sa sarili mo, hindi mga tao mag-aadjust para sa ‘yo. (You have to adjust. It is not the people around you who will adjust for you.)”

Chief Inspector Elizabeth Jasmin, PNP CIDG spokesperson, said a certificate of detention has already been issued by the Women and Children’s Protection Unit as a requirement for Cornejo’s release. With a report from Aries Joseph Hegina.