Ronnie Ricketts, 4 others suspended by Ombudsman for ‘neglect of duty’ 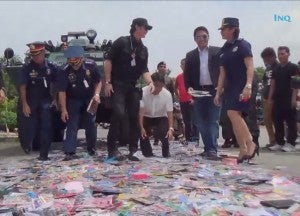 Pirated and counterfeited items were flattened and shredded in a ceremonial destruction at Camp Crame in Quezon City. INQUIRER FILE PHOTO

MANILA, Philippines— The Office of the Ombudsman has suspended Optical Media Board (OMB) chairman Ronnie Ricketts and four other officials for “neglect of duty” after it conducted an operation against pirated DVDs.

In a resolution released on August 28, Ombudsman Conchita Carpio-Morales ordered the suspension for six months of Rickets and four other OMB officials for “neglect of duty.”

The Ombudsman said that on May 27, 2010, OMB agents raided the Sky High Marketing Corporation in Quiapo, Manila.

After the raid, the seized items were brought to the OMB office in the afternoon but were pulled out from the premises in the same evening.

“The Office of the Ombudsman found substantial evidence to hold top officials of the Optical Media Board (OMB) administratively liable for Neglect of Duty in connection with the post-raid operations conducted against Sky High Marketing Corporation (Sky High),” the Ombudsman said in a statement.

“Records show that Ricketts instructed the pull-out of the seized items, without any approved gate pass, using the Isuzu Elf truck owned by the raided establishment Sky High,” the statement said.

Morales also ordered the filing of criminal charges for violation of Section 3(e) of the Anti-Graft and Corrupt Practices Act (Republic Act No. 3019).

The Ombudsman said Ricketts “should have directed the filing of cases against the violators, but he did not.”

“The unjustified release of the confiscated items compromised the pieces of evidence that could substantiate a case/s against those RA 9239 violators, thereby giving unwarranted benefit to Sky High Marketing Corporation and its officers,” it said.

As of posting, Ricketts hasn’t issued any statement.