MANILA, Philippines—Whatever happened to the adorable but naughty kids that starred in the 1994 cult classic The Little Rascals?

Now, its fans—mostly those born late in the 80s and early in the 90s –are given an answer to the question. 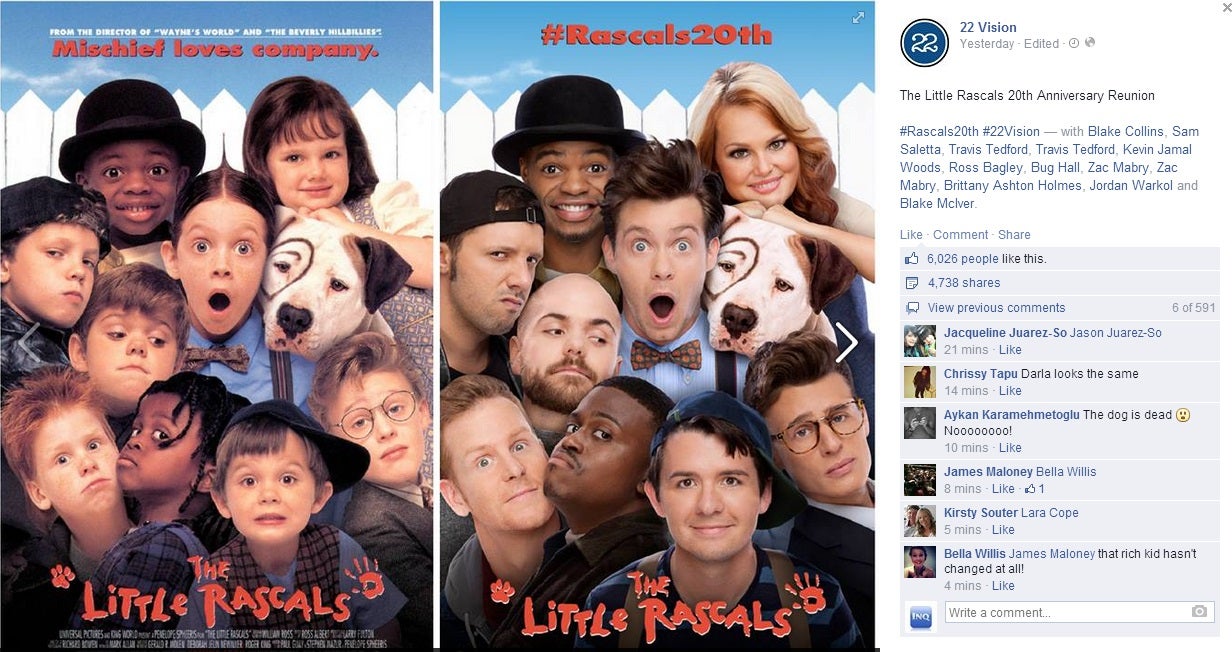 SCREENGRAB from 22 Vision: The Little Rascals

The Little Rascals, a film about the adventures and misadventures of young boys and girls who hated—then learned how to like—the opposite sex, is celebrating its 20th anniversary. And production company 22 Vision has successfully rounded up the movie’s cast to recreate the film’s poster and memorable scenes.

In a report by the Huffington Post, 22 Vision’s founder Brian Pocrass was quoted saying, “The message behind the shoot is embracing who you are.”

“Obviously getting back into the character can be uncomfortable, but it’s about embracing who you were as a child,” Pocrass added.

There are cast members who are still in the entertainment industry: Ross Bagley (Buckwheat) is an actor and disc jockey; Kevin Jamal Woods (Stymie) is a music producer; Blake McIver Ewing (Waldo) is a singer and host; and Bug Hall (Alfalfa) is an actor and screenwriter. The others have concentrated on having other careers. Zack Mabry (Porky) is a public accountant; Travis Tedford (Spanky) is a marketing professional; and Brittany Ashton Holmes (Darla) is a housewife.

Pocrass said bringing all the cast together was a “domino effect” citing the fact that the cast members just wanted to see each other.

The results of the reunion project certainly make for a good Throwback Thursday post on social media.

Read Next
K-pop idol gets wish, posthumously
EDITORS' PICK
Geek out at TOYCON 2022 powered by Smart Signature
UK’s Boris Johnson will resign, BBC reports
High-risk pregnancy: Reducing your risk is in your hands
House energy committee chair Arroyo bats for cheap electricity
High inflation: Your P1 is now worth only 87 centavos
Unemployment rate up to 6% in May
MOST READ
Suspect in grisly killing of missing woman in Bulacan arrested
Hong Kong suspends flight bans as it eases COVID-19 rules
Bongbong Marcos’ first order: Abolish PACC, Office of Cabinet Secretary
Kim Atienza’s daughter flaunts bikini body in response to critics of her ‘revealing photos’
Don't miss out on the latest news and information.