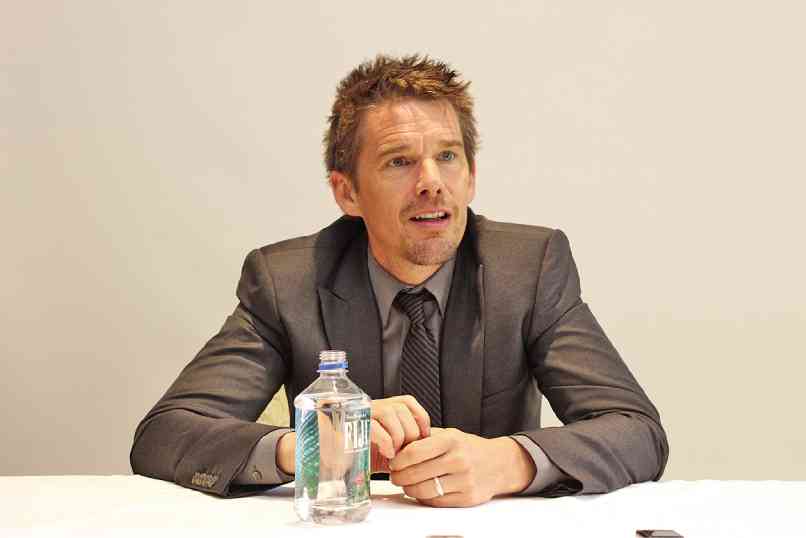 LOS ANGELES—Followers of Jesse and Celine in the “Before” film series, note: It may take more than five years before you’ll get to see the couple again. Ethan Hawke, who plays one half of the married couple last seen in Greece, said in our recent chat that he and Julie Delpy have set a time period before they will consider making a fourth installment.

“We promised ourselves it would be five years before we even ask ourselves the question,” said Ethan, well-dressed as usual in a dark suit. He and Julie cowrote the trilogy with Richard Linklater, who also directed. “That was such a miracle to me that we managed to make three of them without betraying the project’s integrity.”

Ethan added, referring to the most recent “Before Midnight”: “There’s something that feels finished to me about that project, the way that they (Jesse and Celine) relate to each other that I have never felt before. But, that doesn’t mean that in five years, Julie won’t come in and say, ‘I have an idea.’ We are open to it.”

Ethan and Richard also collaborated on a film on a more ambitious scale, “Boyhood.” Richard wrote and directed the film which was shot intermittently for 12 years, beginning in 2002. The drama, shown this year to rave reviews, follows a boy, Mason Jr. (Ellar Coltrane), from age 6 to 18, as he is raised by his divorced parents (Ethan and Patricia Arquette).

Ellar was 7 when filming started and was 18 when the movie was finished last year. Richard’s daughter, Lorelei, was 8 years old when he cast her as the sister of Patricia’s character.

To underscore how many years it took “Boyhood” to be shot, Ethan said that they started “Boyhood” a year before they began filming “Before Sunset,” the second movie in the trilogy. “We were writing ‘Before Sunset’ when we started doing this movie—that’s how long we’ve been doing this. They have been on parallel tracks to me.”

Ethan stressed, “For me, they are two different experiments with time—one focuses on romantic love, and the other on family, two of the most important things to happen to anybody.”

“It’s heartbreaking to watch yourself age,” admitted the 43-year-old when we asked how he reacted upon seeing himself mature in the film. “The kids grow up, but we age. I know there’s just no way around it. The only comfort is that it’s happening to everyone. The only comfort we get is that nobody gets to beat this game.”

Ethan’s face lit up when he talked about the two young actors. “There was something so magical about watching Ellar and Lorelei grow up, showing up on the set one year and, all of a sudden, she’s got red hair and he’s got earrings,” he enthused. “Rick is ahead of me as a father. Ellar and Lorelei are older than my kids, so I was always seeing what was coming up, because of my character—attitudes or whatever. It was magical that way.”

Ethan gushed about this latest achievement of Richard, whom he first met when the latter cast him in “Before Sunrise.” “I have known Richard intimately since 1994,” Ethan shared. “He’s achieved something with this film that is beautiful and special. My first reaction was really as a friend. I know how hard he has worked on this. He put his own money into it. He has unbelievable patience.”

“The movie itself is an act of goodwill,” Ethan remarked. “Nobody had to show up. Patricia had no contract. You can’t legally contract anybody to do something more than seven years. The kids didn’t have to come back. Everybody came back because they wanted to. They believed in the idea that this was of value.”

Patricia, in a separate interview, was equally candid when we also asked her how she felt, as a woman and an actress, to see herself mature through 12 years in “Boyhood.”

“Part of it was exciting to me, because so much in Hollywood is about the ego and image,” she said. “It’s always been part of film but it’s probably my least favorite part of it. I wanted to be brave about exploring and seeing that.”

Laughing, Patricia confessed, “Having said that, I do have an ego, and I do have moments when it’s difficult to see (myself in the film). But, I think, all of my friends, even if they are not actors, look in the mirror. Sometimes, I look in the mirror and go, ‘Who is that old lady? What is she doing here?’

“It’s more obvious because I am an actor, but I think it happens to all of us. There’s something beautiful about it happening.”

Ellar, whom we also interviewed, was praised as phenomenal in his performance. Richard did not show Ellar any footage, so he would not be self-conscious. Ellar described to us how he felt when he saw the completed film for the first time: “I had a wide range of emotions. The way you change over time—it’s something that is hard to see in yourself.

“When you’re in the thick of it, you can’t see yourself changing or necessarily be able to track how you change over a period of time. So, it was impactful to see (in the film) how I’ve changed and how I haven’t changed.”

“Even more amazing is seeing that little person I don’t remember being, but I still recognize myself in that person,” Ellar said. “I’m still kind of the same person. It takes on a new meaning every time I see it. It has become a lot easier after the past few times I’ve watched the film. But, the first time I watched it, it was a rush of almost every emotion you can feel.”

We asked him which scene moved him the most: “Definitely, the most meaningful moment for me is the last scene. But, certainly, also the early stuff—the first couple of years that I don’t remember entirely is the most amazing. It was kind of tender to watch because that’s a part of my life that I don’t remember very well. It was incredible to see it!”