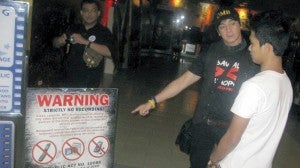 Working closely with the Motion Picture for Anti-Film Piracy Council (MPAFPC), Ricketts said his team arrested a man for attempting to record the festival entry “Enteng ng Ina Mo” at the Shangri-La Cineplex in Mandaluyong City on December 25.

Ricketts said this was a violation of the Anti-Camcording Law, which says, “Any person caught using or attempting to use an audiovisual recording device to transmit or make a copy of any part of a performance in an exhibition facility of any cinematographic film or other audiovisual work will be fined from P50,000 to P750,000, face imprisonment of a minimum six months and one day to six years and one day.”

The film’s producer, Star Cinema, has been informed of the incident, Ricketts told Inquirer Entertainment on Monday.

He added: “We are pleased that theater owners are cooperating with us. We recently had a dialogue with them and we’re glad they’re complying with our suggestions.”

Ricketts said three teams did the rounds of metro cinemas all day last Monday. “I was with one team. The operation was very fruitful. I’m confident that the MMFF will exceed its record P530-million box-office earnings last year.”

The Metro Manila Development Authority hosts the annual film festival, which runs until Jan. 7. Proceeds from the two-week event will benefit the Movie Workers’ Welfare Foundation (Mowelfund), Film Academy of the Philippines (FAP) and the MPAFPC. 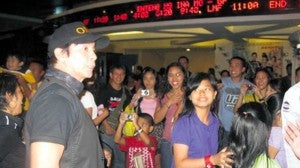 ONCE AN ACTOR… Fans gather around OMB chief during a stop on the Christmas Day cinema rounds. Photo courtesy of OMB

“It’s good that we’re getting help from the anticamcording group. For many years, we’ve been doing this on our own. The work is made easier when people cooperate,” Ricketts said.

In 2009 former President Gloria Macapagal-Arroyo signed the Anticamcording Act, which boosted the government’s fight against movie piracy in the country. Tasked to enforce the law are the OMB, Philippine National Police, National Bureau of Investigation and National Cinema Association of the Philippines (NCAP), theater owners and owners of cinematographic films or audiovisual works.

Ricketts said the OMB has been extremely busy since the start of Christmas week. “We started monitoring theaters on December 23. A week before that, we had a dialogue with Muslim brothers [who sell pirated films on DVD] about the importance of a successful MMFF to the entertainment industry.”

On December 24, Ricketts joined the Parade of the Stars which officially starts the MMFF. “We’ve been doing this for three years now… to make people aware that the OMB supports the festival.”

Ricketts said his wife, actress Mariz, has gotten used to the demands of his job. “I may be busy but I’m happy. My team members sacrifice time with their families for this cause.”

Read Next
Memo from Big Boss: Stop talk of scandal
EDITORS' PICK
Geek out at TOYCON 2022 powered by Smart Signature
High inflation: Your P1 is now worth only 87 centavos
High-risk pregnancy: Reducing your risk is in your hands
Unemployment rate up to 6% in May
House energy committee chair Arroyo bats for cheap electricity
Bye bye Boris: UK PM Johnson bows out with regrets but no apologies
MOST READ
Suspect in grisly killing of missing woman in Bulacan arrested
Kim Atienza’s daughter flaunts bikini body in response to critics of her ‘revealing photos’
Bongbong Marcos’ first order: Abolish PACC, Office of Cabinet Secretary
Ex-Defense chief Lorenzana is the new BCDA chair
Don't miss out on the latest news and information.