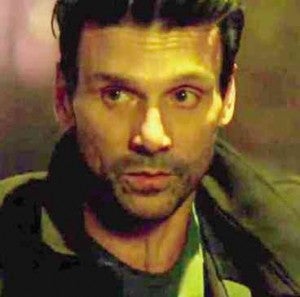 GRILLO. Out to settle an old score.

What would you do if it were legal to commit heinous crimes over a period of 12 hours? Would you use it to settle old scores? Ethan Hawke’s character fell victim to this type of “cleansing” in James DeMonaco’s “The Purge” last year.

The idea may seem preposterous, because there are rarely contentious gray areas in matters of right and wrong. But, the first installment of the cautionary horror franchise resonated with moviegoers so much that they turned the $3-million film into a $90-million sleeper hit!

Showing next week, “The Purge: Anarchy” ups the horror ante by letting its beleaguered protagonists go beyond the limitations of a confined space—and presenting higher stakes for them to hurdle. (It has already breached the $100-million mark at the tills.)

Set in 2023, the annual 12-hour Purge is sanctioned by the US government as a way for its citizens to air their grievances without fear of persecution or arrest. As a result, the crime rate is virtually nonexistent, while unemployment is kept below 5 percent—but, at what price?

This time, the film revolves around three intersecting stories: Policeman Leo Barnes (Frank Grillo) is out to avenge the death of his only son from drunk driving—but, on his way to the house of his target, Warren Glass (Brandon Keener), he runs into Eva (Carmen Ejogo) and her daughter, Cali (Zoey Soul), and married couple, Shane (Zach Gilford) and Liz (Kiele Sanchez)—who are on the run from Purgers!

Eva likewise finds herself (and her daughter) being chased by paramilitary men. Lucky for them, their situations bring out the cop in Leo, who decides to help them escape their attackers.

The cat-and-mouse chase leads the quintet to the movie’s grittier section—to a theater run by rich Purgers who bid on the right to kill their unfortunate captives, who are sent to their imminent deaths in a terrifying chamber! Can Leo outsmart his blood-thirsty captors? And, if he can, will he have enough time to confront his son’s killer before the purging season ends?

Horror flicks and suspense-thrillers always draw attention for their histrionic appeal by building on the thrill of progressive anticipation. “Anarchy” is no different—while it feels thematically superfluous, it benefits from a breezier pace and further amplifies viewers’ claustrophobia by “expanding” the characters’ “playing” grounds— from a confined space to the unprotected expanse of open fields.

There’s nowhere to hide—which is what makes this sequel more terrifying! As it attempts to whet your appetite for cerebral stimulation (the moral questions it raises are unsettling), it also satisfies your craving for superficial fun and cheap thrills.

Leo learns some hard and pertinent lessons about guilt, accountability and acceptance. However, there are gratuitous sequences that betray man’s innate ability to show compassion for others—and warn viewers against the dangers of narrow-minded moral proselytizing!

The cautionary message is occasionally excessive but clear: When we squander the capacity to empathize and forgive, we lose what sets us apart from the uncompromising cruelty of other creatures! —Are we any different from the beasts we fear?