How to make your film–and sell it abroad 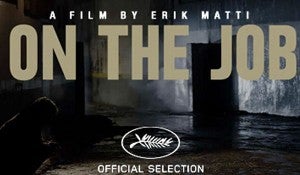 Early this month, we listened to filmmakers who talked about their experiences breaking into the international film market, at this year’s Manila Film Financing Forum at CCP.

“On The Job” director Erik Matti reveals that certain film themes are “hot” in the world market: “Crime travels anywhere, so the less dialogue, the better. Horror has to have a high concept with a powerful twist. Ghosts don’t work anymore. Comedy doesn’t really travel well abroad.  Even in Cannes, an arthouse film is difficult sell.”

Although “OTJ” didn’t do well in the local box office, it has been successful in video-on-demand and streaming abroad.  My recent trip to the US saw me subscribe and buy “OTJ” on Netflix.

Matti  says, “We should be aware where the business is going.  It’s VOD and streaming.  These formats will wipe out Blu-Ray DVDs. It will bring the films to your house, and any genre will have an equal opportunity to get an audience.”

Matti recalls that “OTJ” didn’t make money locally, because it wasn’t sold properly. “We only made money because of the international market. Its video sales are strong!”

For producer Moira Lang (Raymond Lee), to raise funds for the Cannes premiere of “Norte, Hangganan ng Kasaysayan,” they did an alternative marketing strategy:  “We held a fundraising dinner and sold artworks and raffle tickets. And, we had a generous donor.”

Recalling the film’s Cannes experience, he laughs: “We were dressed in designer gowns, but we came from a small, jampacked room, with five people sleeping together!”

Babyruth Villarama Gutierrez, who’s finishing her latest documentary, “The Boy With No Shoes,” advises:  “If you’re planning to put your film on YouTube and you haven’t maximized the potential of the film, don’t! If you put it out there, there might be bookers, producers or distributors who are interested, sayang naman.  Once it’s released online, no film festival is going to get you.”

Matti notes: “Some filmmakers say no to compromises. My training in advertising has taught me to listen to other people.  We’re doing a project with Star Cinema. Every time I meet them, there are 25-30 people in the room, and everyone speaks up. I do not get offended, because I respect the collaborative process. If you go that way, it’s up to you to keep your sanity intact. Take care of your producers, because money is hard to come by.”