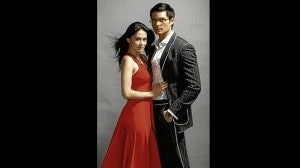 After months of hemming and hawing, Dantes finally proposed to longtime girlfriend Rivera in the latter’s dance show “Marian,” aired live on Saturday night on GMA 7.

The weekly show’s episode was supposed to be a joint birth anniversary celebration. He turned 34 on Aug. 2; she’s turning 30 on Aug. 12.

Instead of a birthday bash, it turned into a pre-wedding party—with the entire country as witnesses.

Rams David, Rivera’s manager told the Inquirer: “She is ecstatic . . . happy. She’s on cloud nine and she’s at peace.”

Rumors of the couple’s impending nuptials have been circulating in show biz for the longest time.

When asked if she and Dantes would tie the knot in 2014, Rivera told the Inquirer in an interview held earlier this year: “As Dong would say: Not so far, but not so near. ’Yon na ’yon.  That’s it. It sounds confusing, but we understand each other.”

In a separate interview with the Inquirer, Dantes said: “When the time comes, we will let everyone know about our plans.”

And they did, on live national television no less.

After the televised proposal, Dantes and Rivera rushed to have dinner with their respective families, Angel Javier, head of GMA 7 Corporate Communications, told the Inquirer. “They didn’t have time to talk to anyone,” Javier said, as they were obviously in a hurry to celebrate with their loved ones.

The proposal came at a time when there is also talk that Dantes might run for senator in the next national elections in 2016.

Asked about the possibility of Dantes’ candidacy, Rivera told the Inquirer earlier this year: “Bahala siya sa buhay niya! Ayoko! (It’s up to him. I don’t want to get involved in politics.) Whenever I am asked to run in my home province of Cavite, I say no. But I’ve told Dong that whatever he decides in life, I would support him for as long as it would be good for him and other people.”

David told the Inquirer that the couple will hold a press conference to discuss their plans soon.