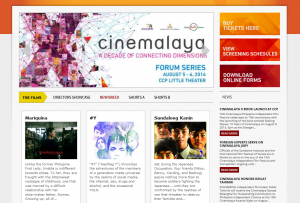 MANILA, Philippines—Seasoned directors from television and commercial movies cross over to the indie scene and embark on the annual adventure that is Cinemalaya.

“I needed to tell this story,” said Altarejos, who directed soap operas like “Blusang Itim” and “Legacy” in the past. “It’s based on a friend’s story.”

His goal was to show that the experiences of homosexual couples are not different from the struggles of other lovers. “We feel love and get hurt. It’s just that it’s more difficult for us to navigate through the different institutions in society.”

“Kasal,” which focuses on gay lovers who have reached a crossroads in their affair, is Altarejos’ contribution to the discourse on same-sex relationships. “Family members can accept or reject us. We have no place in Christian dogma. But members of the LGBT community continue to fight, hope and dream that equality will become a reality someday,” he said.

Michael Tuviera’s “The Janitor” was finally realized after years of hemming and hawing. Tuviera has always dreamed of joining the Directors’ Showcase section, but felt he was too young to be lined up with industry veterans.

“My father is a staunch supporter of independent filmmaking,” he said. “To be able to finally join Cinemalaya on its 10th anniversary makes me happy and proud.”

For his Cinemalaya debut, Tuviera fielded an unusual entry: A “heist” film. “I was intrigued by a real-life tragedy dubbed the ‘bloodiest bank robbery in the country’s history.’”

Louie Ignacio’s “Asintado” marks a departure for the director more known for music videos and GMA 7 musical-variety shows like “Basta Every Day Happy” and “Marian.”

Ignacio clearly wanted to create something different for his first Cinemalaya film.

“Ramon Obusan, National Artist for Dance, gave me the idea for a film on the Taong Putik Festival in Nabiclat, Nueva Ecija,” he recalled. “It’s a mysterious and awe-inspiring celebration that honors St. John the Baptist.”

“There are numerous images . . . that all lead to the central story, a mother’s painful decision,” he explained. “I am also the cinematographer and what’s in my heart and mind comes out onscreen.”

In the end, he described the film’s visuals as “straightforward because I have a simple message: finding beauty in peace.”

“Hustisya” is Joel Lamangan’s third Cinemalaya film, after “Sigwa” (in 2010, the inaugural year of Directors’ Showcase) and “Patikul” (2011).

“It’s important for me to be part of Cinemalaya on its 10th anniversary,” he said. “I was part of the fest from the very start . . . at first, as an audience member and avid supporter, and, when the Directors’ Showcase was established in 2010, as a participant.”

“Hustisya” likewise serves as his reunion with actress Nora Aunor and scriptwriter Ricky Lee. The trio last worked together in the 1995 movie “The Flor Contemplacion Story.”

“In ‘Hustisya,’ Ricky and I wanted to depict Manila as a main character as well,” Lamangan said. “That’s why we had to show Nora walking in Quiapo, Sta. Cruz, Blumentritt, and riding the LRT.”

The presence of the Superstar in public didn’t cause a commotion, he recounted. “We had good crowd control and the people of Manila were respectful of Nora. They followed when we told them not to look at the camera during the shoot.” 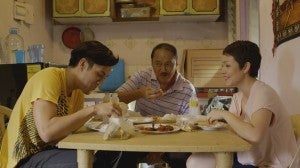 Working as jury member in last year’s festival inspired him to make his own film this year. The work of his students at the New York University Tisch School of the Arts Asia (Singapore) likewise pushed him to go back behind the camera.

He chose a personal story for his return.

“I lost my father four years ago,” he related. “I still miss him. I initially wanted a father-and-son story. Though different from my own story . . . I wanted to show how a father’s good intentions for his child can lead to behavior and choices that are destructive to both of them.”

Scriptwriter (and Siguion-Reyna’s wife) Bibeth Orteza wanted to “highlight the grandfather’s dreams for his grandkids,” though.

The resulting film tied both threads together, he said. “An elderly man’s uneasy relationship with his children is contrasted with [his strong bond with] his grandkids.”

Siguion-Reyna is pleased to be back. “Cinemalaya has given me the privilege to work with a great company of production administrators, energetic and creative staff and a talented cast culled from film, TV and theater. It’s an exciting mix of people from different worlds.”

The box office hits in Ayala Theaters are:

At the CCP, the box office hits are:

(NOTE: All box office hits will be shown again in their respective venues on Sunday, the final day of the festival. Tickets are selling fast. Viewers are advised to purchase early.)