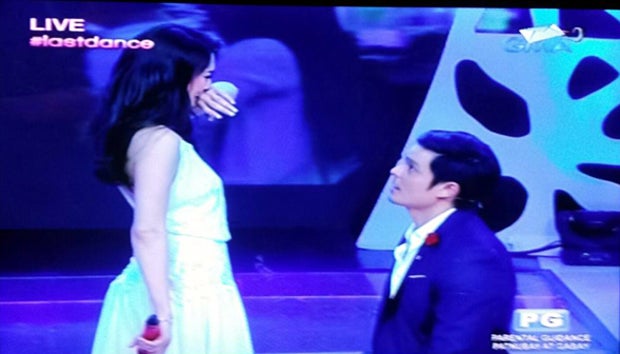 Screengrab from “Marian” on GMA 7

MANILA, Philippines—While the date has yet to be finalized, actor Dingdong Dantes, 34, said he and fiancee Marian Rivera were planning to hold their wedding some time this year at the Immaculate Conception Cathedral in Cubao, Quezon City. On his knees, Dantes proposed to the 29-year-old actress and his girlfriend of five years during the latter’s GMA 7 dance show, “Marian,” Saturday night.

“We’re still ironing a couple of things out. When we announce the date, we want it to be final,” Dantes told the Inquirer in a phone interview. “We haven’t discussed the theme yet.”

Pointing out that show biz brought them together, Dantes said it was only fitting that he made the proposal on live television. “We’re still overwhelmed. It feels good that I was able to show the world, especially to our family and friends, how serious I am about our relationship,” said Dantes, who first worked with Rivera on the 2007 soap “Marimar.” “It’s great that we had this opportunity. We nurtured our relationship for a long time.” With a report from Jodee Agoncillo