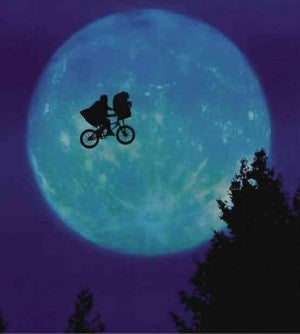 “E.T.” Its iconic image made viewers want to watch the sci-fi production.

On the movie production scene, financiers and filmmakers talk with special fervor about “the money shot,” the particular image in a film that is so striking, unusual or iconic that it makes viewers want to watch a new production.

Examples abound: In Steven Spielberg’s “E.T., The Extra-terrestrial,” the money shot was the exact moment that, thanks to the movie’s resident alien’s power, the bike-riding youths protecting it were suddenly made to “fly” on their bicycles to escape the police posse pursuing them!

Viewers reacted to that magical, literally “liberating” image with excitement and empathetic delight, and “E.T.” went on to become a “sleeper” (unexpected) hit at the box office.

On another iconic sci-fi film, “Close Encounters of the Third Kind,” the money shot was the part in the movie’s introductory historical montage that showed the human race’s progress from ape, to caveman hurling a big bone up in the air—and the image of the bone slowly “dissolving” into the similarly shaped image of a space station in the distant future.

In a very short time, the inspired montage was brilliantly and succinctly able to sum up eons of time rapidly passing by, by way of that breathtakingly moving image.

In the really terrifying chiller, “The Exorcist,” the money shot was the moment when the possessed body of poor, little Linda Blair was demonically lifted in the air from her sickbed—and her tiny head was then made to revolve a full 360 degrees!

After we watched the film, we had to sleep with the lights on, because we couldn’t get that “proof” of absolute demonic power out of our mind!

These thoughts come to mind, because we’ve recently watched a number of movie trailers that are successfully enticing viewers by way of their own striking money shots: On “Sex Tape,” starring Cameron Diaz and Jason Segel, the image in the trailer that has viewers talking is the one showing the leading man in his bikini briefs—and Cameron in a wee bikini bottom—and kinky roller skates!

On “Into the Storm,” the disaster film to end all apocalyptic flicks, the money shot is the image of the superstorm raging so strongly that a number of huge passenger jets parked at an airport are lifted up in the air like tiny toys!

In “Hercules,” the most striking and crowd-drawing image is that of the title character going to a seemingly placid river—and then suddenly having to fight for his life as a hydra-headed monster rears up to attack him!

Filmmakers take a really long time thinking up iconic images like those, and spend a lot of money to realize them. But, it’s well worth the time and expense, because some money shots are so potently seductive that they could mean the difference between success and failure for the productions they promote!