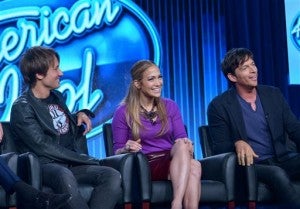 In this Jan. 13, 2014 file photo, judges, from left, Keith Urban, Jennifer Lopez, and Harry Connick Jr. are seen during the panel of “American Idol” at the FOX Winter 2014 TCA, at the Langham Hotel in Pasadena, Calif.  AP FILE PHOTO

“We haven’t found in the last two years a group of kids who’ve captured the imagination of the public,” he said.

Rice went on to say that “American Idol,” launching its 14th season next year, is “aging gracefully.”

He said too much attention has been placed on “this constant conversation about who should be judges.”

Jennifer Lopez, Keith Urban and Harry Connick Jr. will return to the panel for season 14.

Rice acknowledged the obvious — there are a number of shows like “Idol” on the air these days.

He still believes “‘Idol’ has a very committed fan base.”

This year’s season finale of “American Idol” was its lowest rated yet.