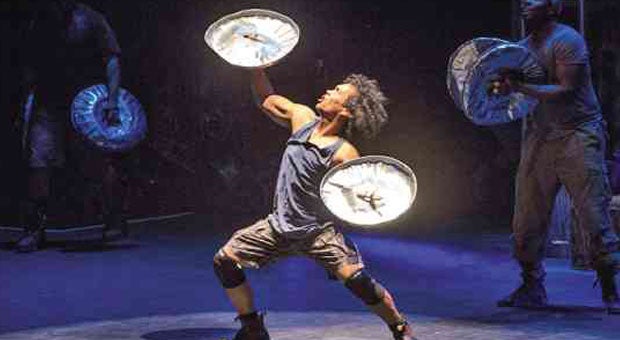 ANDRES Fernandez became part of the cast in 1997.

MANILA, Philippines–Performing in the Olivier Award-winning percussion-dance act “Stomp” since 1997 has taken Filipino-American music artist Andres Fernandez across the globe.

But it was the first time—on June 17—that he performed right here before fellow Filipinos.

“It was crazy!” Fernandez told the Inquirer of the acclaim accorded him a day after the show opened at the Cultural Center of the Philippines Main Theater, where it was booked on a six-day run.

Cocreated in 1991 and codirected to this day by British musicians and former buskers (street entertainers) Steve McNicholas and Luke Cresswell, “Stomp” is a heady mix of percussive music, explosive dance and visual comedy.

“It is essentially an exploration of sound. Music is all around us and it is infectious. There is rhythm in the way we walk and talk; to start with, we all have heartbeats. In the show, we amplify this reality by creating music from everyday objects,” Fernandez said.

On opening night, Fernandez (who alternately plays the funnyman Mozzie) tested the Filipino sense of rhythm by giving them clapping “exercises.” He wasn’t disappointed.

“They picked up the patterns very quickly. This makes the Filipino audience the fastest I’ve encountered so far—faster than Brazilians, faster than Mexicans … Or maybe they just paid more attention because I’m Filipino, too,” Fernandez said.

The feeling was mutual. The audience roared approvingly when Fernandez turned up on stage for the next routine. The standing ovation in the end was prompted by his second curtain call.

The show, which debuted in Broadway in 1994 and in West End in 2002, came to the Philippines three years ago with a different cast. From that set of performers, only Little and Landis returned for this year’s series, which is presented by Lunchbox Theatrical Productions and Concertus Manila.

Born and raised in Hawaii by a Masbateño father and a Kapampangan mother, Fernandez was a young professional musician in the 1980s, singing and dancing with his brothers in birthday and graduation parties and other gatherings at a Filipino restaurant in the US island state of Hawaii.

“Our parents were not musicians like we turned out to be, but they were very supportive,” said the live-wire Fernandez. “Mom, in particular, was very encouraging.”

He was only 11 in 1985, when he and his siblings held their first concert at the Hilton Hawaiian Village Dome, and subsequently toured the islands. “We got to open for Martin Nievera, Gary Valenciano, Romnick Sarmenta and other Filipino artists who came to Hawaii to perform,” he said.

“It’s good to be back,” Fernandez said, “although I haven’t found the time to visit relatives in the provinces because we’ve been very busy. But I’ve been meeting, for the first time, a lot of cousins on my dad’s side, who are based here in the city. It’s awesome. Some of my aunts are watching the show. I’m happy.”

Currently based in Las Vegas, Nevada, Fernandez said Johnny—who played Thuy in 1999 with a touring production of “Miss Saigon”—urged him in the mid-1990s to try his luck in Los Angeles, California. He did, trying out for roles in theater productions, including “The Lion King,” “Starlight Express,” “Joseph and the Amazing Technicolor Dreamcoat” and “The Phantom of the Opera.”

“My last audition was for ‘Stomp.’ I did a back handspring and my feet went over. The panel must have thought I was nuts,” Fernandez said.

In an earlier account, Cresswell, one of the creators, recalled that audacious antic: “He nearly killed himself with a somersault! Sometimes in auditions, people do things they think they can pull off. He had not done that for years and he decided—and he’s quite a big guy—to do a flip. He nearly landed on his head. He’s crazy!”

But “crazy” was apparently high on the “Stomp” directors’ list of requirements. Fernandez got a callback, and was hired in May 1997.

For everyone onstage, the job involves high-octane choreography that requires them to spar, jump, slide and tumble on an almost daily basis. Fernandez, needless to say, is far from unscathed.

“I’ve been minding two herniated discs in my lower back since 2009. I was stitched up in the face after I got hit by a pole. On stage, you always get hit by elbows from nowhere, and everywhere,” he said. “But we have so much fun!”

He’s had nearly 20 years of that, and Fernandez has not once considered a life out of it. “I guess I’m enjoying myself too much. When the time comes, though, there are a few things I could do—drumming or singing gigs, perhaps,” he said. “Or advocacy work. I’m helping a friend mount an antibullying campaign.”

Meanwhile, Fernandez stomps along, propelled by a “passion for performing.” He said, “My brother told me I should use this gift that God gave me. I’ve never regretted following that advice.”