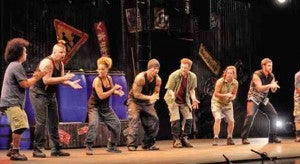 The critically acclaimed percussion-dance act “Stomp” kicked off a very limited (six days) Manila run at the Cultural Center of the Philippines Main Theater on Tuesday night, delighting a packed crowd with meticulously choreographed, seamlessly woven routines that fused an array of thumping beats and rhythms with equally robust movements.

Using objects usually found in a junkyard or in a kitchen, the performers, otherwise known as “Stompers” filled the venue with music as mellifluous as it was discordant—brooms whacked hard and fast against the floor, crashing trash bin lids, banging metal drums and black rubber lifebuoys, and clanging old pots and shopping trolleys.

The subtler-sounding “instruments” were just as striking as the clangorous ones. Newspapers were crumpled and torn. Matchboxes served as rattles. Latex gloves grated against sinks to a blunt screech. And when the accordion pipes were unraveled, they sounded like croaking toads. In the quietest number, the performers served up a visual feast, using Zippo lighters to create various patterns in the dark.

As enthralling as the show was, Buckley admitted that they did commit mistakes on opening night. “A couple of trivial errors, some spacing issues. We just covered it up and made it work,” he told the Inquirer the next day. 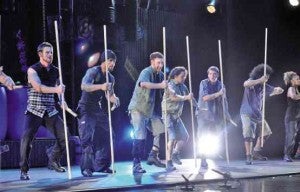 THEY’VE got rhythm, but laud the Filipino audience for keeping up with them.

Beyond entertainment, “Stomp” was a showcase of relentless athleticism, power, dexterity, precision and coordination. For close to two hours, the Stompers—all the while making music—threw themselves to the floor, juggled basketballs, sparred using wooden poles, pounded away at a motley collection of junk while suspended in the air.

While the cast made each exhilarating stunt look fun and easy, the work that went into it was anything but. Vincent, a brawny dancer from New Zealand, related that he underwent hip surgery last year, and once got a tooth knocked out onstage. He jested, “Three years into it you start getting knee pain, back pain… life pain!”

Londoner Shae Caroll, a new member, said he was hit on the head by a paint can thrown up in the air during training. “It was very sharp; I got cut. I’m covered in scars now. But accidents do happen,” said Caroll, who jested that he once aspired to become a hand model. “I had such smooth hands,” he said.

Despite the sheer physicality of their routines, they performed Tuesday night with dogged enthusiasm, and, more importantly, cheekiness and humor—an aspect that, the cast members agreed, makes the show constantly “fresh.”

“These guys make me laugh so much, I piss myself! Humor is important. If I weren’t laughing as much, I’d be gone [from “Stomp”],” said Gus Little, who stole the show with antics that included emptying a water-filled sink into a bucket as though he were pissing in a urinal.

American actor Talley’s character, Mozzie, usually got the short end of the stick. In one routine, he got the smallest rubber pipe to play with. So he held it suggestively, drawing riotous laughter from the audience. Talley likewise thrilled everyone with splits and cartwheels seemingly done out of nowhere.

Not a single word was uttered throughout the show; humor was conveyed visually and punch lines took the simplest forms—a grunt, a nod, a taunting glare. 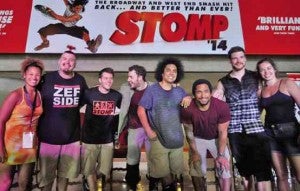 “Filipinos are a funny bunch, too,” Little enthused. “You have a great sense of humor here. You make me laugh relentlessly. You get everything—down to the little jokes and nuances. It’s just a great crowd here.”

Another highlight was the interaction between the performers and the crowd, with Fernandez and Talley intermittently challenging everyone to keep up with the beat of their tapping and clapping. Needless, to say, the Stompers were impressed with the Filipinos’ sense of rhythm.

“I think Filipinos are some of the most talented people on earth,” Vincent said. “You’re amazing.”