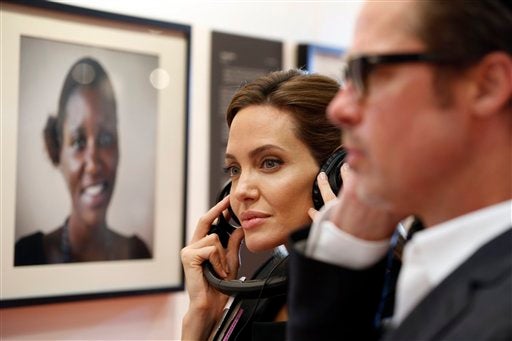 US actress Angelina Jolie, Special Envoy of the United Nations High Commissioner for Refugees, and her partner US actor Brad Pitt, listen to testimonies of victims of violence at the ‘End Sexual Violence in Conflict’ summit in London, Thursday, June 12, 2014. AP

They hope representatives of the more than 100 countries present will back a new protocol laying out how sexual violence in conflict zones should be investigated and prosecuted. They say they want to end the “culture of impunity” for wartime sex crimes.

Pitt watched from the audience as Jolie and Hague spoke to delegates at the east London conference venue.

Billed as the biggest-ever summit on the subject, the gathering has drawn diplomats, officials, charity representatives and survivors of wartime rape.

Jolie said the meeting, which ends Friday, was being held “for all the forgotten, hidden survivors who have been made to feel ashamed or been abandoned.”

“And for the children of rape — we want the whole world to hear their stories and understand that this injustice cannot be tolerated, and that sorrow and compassion are not enough,” she said.

Hague and Jolie have made an odd but effective double act as they’ve campaigned against sexual violence for the past two years.

Hague said the “Maleficent” star “has the power to speak to the whole world, to raise awareness, change attitudes. Governments like the one I am a member of hold in their hands levers of decision-making and action.

“And this combination can be formidable.”