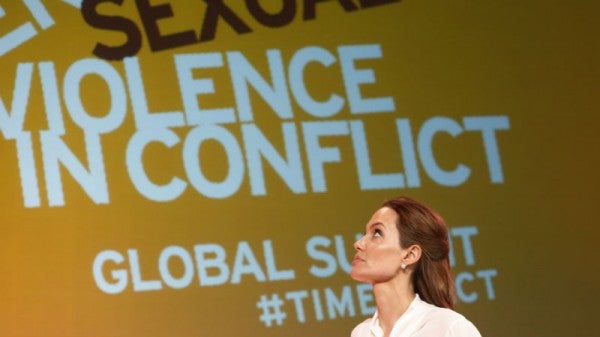 US actress Angelina Jolie, Special Envoy of the United Nations High Commissioner for Refugees, arrives for the presentation of the International Protocol on the Documentation of Sexual Violence in Conflict, at the ‘End Sexual Violence in Conflict’ summit in London, Wednesday, June 11, 2014. The Summit welcomes governments from over 100 countries, over 900 experts, NGOs, Faith leaders, and representatives from international organizations across the world. AP

The document, which offers guidance for those on the frontline who document sexual violence, was launched at a four-day global conference to end sexual violence in conflict in London co-chaired by Jolie and Hague.

It offers proposals on how best to recognize sexual violence as an international crime and how to investigate it.

The protocol also sets out how to protect victims and witnesses and how to safeguard interviews and information.

Jolie said up to 50,000 women were victims of sexual violence during the war in Bosnia – but “only just over 60 people” have ever been successfully prosecuted.

Jolie, whose 2011 film “In the Land of Blood and Honey” focuses on rape victims during the Bosnian war, said that when she has met survivors, they all ask for one thing- “Justice”.

Warzone rape, she said, is a “crime against humanity” and the rights of survivors- to be accepted by society, to be supported, and to see their attackers held accountable before the law- are denied to millions of people around the world.

“The number of convictions for warzone sexual rape is pitifully small,” she said.

The centrepiece of her and Hague’s campaign is a call for an end to impunity.

“Perpetrators have to know that even during conflict, evidence is being collected and it will be used against them,” Jolie added.

“They have to know that when peace agreements are made there will be no amnesty for rape.”

The actress added: “We all know how hard it is to secure convictions for rape even in stable democratic countries, so we have to work even harder to make justice possible in fragile countries.

“And that is the purpose of this protocol. It is an essential document.”

Hague said he hoped it would play a “vital role in shattering the culture of impunity” for sexual violence in conflict.

He said “untold thousands of rapes have gone entirely unpunished” in countries including Sudan, and in the conflict in Syria, including the sexual violation of men.

“We are determined to ensure that prosecutors, police forces, peacekeepers and civil society on the front line in this struggle know how best to document and investigate sexual violence in conflict so that the perpetrators can be successfully prosecuted,” he added.

Hague said that Britain would work to see the protocol implemented and it would be translated into multiple languages and distributed worldwide.

On the sidelines of the third day of the conference on Thursday, Hague will chair a meeting on violence in northern Nigeria in the wake of the kidnapping of hundreds of schoolgirls by the Boko Haram militants.