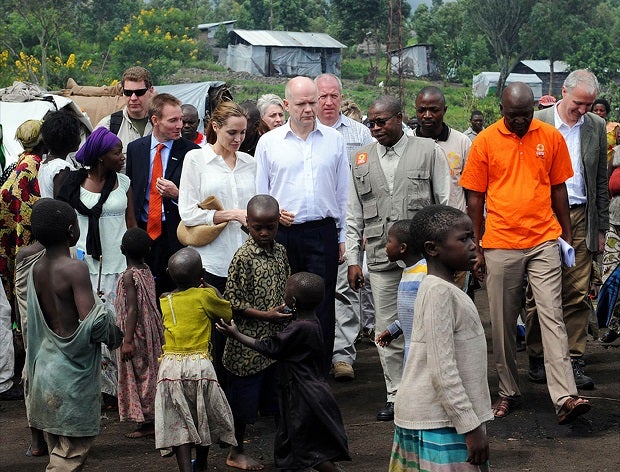 In this March 26, 2013 file photo released by Britain’s Ministry of Defence, Britain’s Foreign Secretary William Hague with actress and UNHCR Special Envoy Angelina Jolie, visit Lac Vert camp in the Democratic Republic of Congo, as they traveled to Africa to to raise awareness of war zone rape. Jolie stars in the Disney film, “Maleficent,” releasing in U.S. theaters on May 30, 2014.  AP

The summit, starting Tuesday, aims to identify ways to improve investigation of sexual violence and provide support for women and girls.

Hague and Jolie, a U.N. envoy, are scheduled to launch an international protocol to help strengthen prosecutions for rape in conflicts on Wednesday.

On Thursday Hague will host a meeting focusing on the Islamist terrorist group Boko Haram, which will be attended by foreign ministers from Nigeria and neighboring African countries.

The group’s abduction of more than 300 schoolgirls in Nigeria in April has put attention on the issue of violence against women in conflict areas.