NGO: No drug test, no PH entry for One Direction

Video by ASSOCIATED PRESS/edited by INQUIRER.net

MANILA, Philippines—Before they could be allowed to perform in the Philippines next year, British boy band One Direction members should undergo a drug test first, an anti-drugs group appealed on Monday.

And while the five-member band performs onstage in March 2015, organizers must allow anti-narcotic agents to monitor them to ensure they’re free from the influence of drugs.

“If they want the concert to push through, the members should take a drug test as soon as they arrive at Ninoy Aquino International Airport (NAIA) before us and the media,” Jonathan Morales, the group’s spokesperson said in a statement. 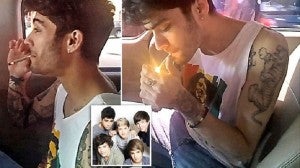 Seeking for “consideration and respect” from the band members, the group maintained that One Direction should strictly abide by the Comprehensive Dangerous Drugs Act of 2002, which deems marijuana as an illegal substance.

Morales, a former PDEA agent, also warned the Bureau of Immigration (BI) on approving the visa of “drug addict performing artists” whom his group tagged as “undesirable aliens.”

(When we could be strict on common tourists, we could not just go easy on these (suspected drug) addicts who would go here just to make money.)

In a phone interview with INQUIRER.net, Morales added that his group will formalize their request to the PDEA office on Tuesday.

“This is to show them that we are serious in this appeal,” he said.

The video, obtained by the United Kingdom-based Daily Mail, appears to have been filmed by 22-year-old Tomlinson in the back of a car in Peru during the South American leg of the boy band’s world tour.

Tomlinson says in the video: “So here we are, leaving Peru. Joint lit. Happy days!”

At one point he asks his bandmate, “What do you think Zayn about that kind of content?” The 21-year-old Malik responds: “Very controversial.”

A motorcycle police officer drives past and Tomlinson says: “He’s having a look. He’s thinking ‘I’m sure I can smell an illegal substance in there’. And he’s hit the nail on the head.”

One Direction’s Manila concert has been extended for two days due to the large volume of expected audiences.