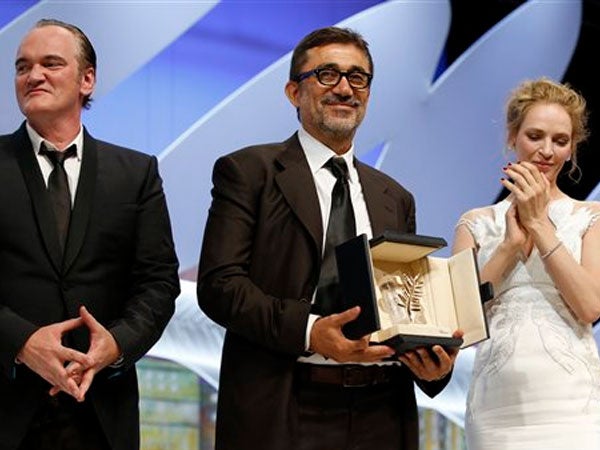 Director Nuri Bilge Ceylan accepted the award, handed out by Quentin Tarantino and Uma Thurman at the French Riviera festival. In his speech, Ceylan alluded to anti-government protests in Istanbul that began a year ago and have raged following a recent mining disaster that killed hundreds.

“I want to dedicate the prize to the young people in Turkey and those who lost their lives during the last year,” said Ceylan.

For the second year in a row, Cannes awarded its top honor to a film running more than three hours. The French lesbian coming-of-age tale “Blue Is the Warmest Color” won the Palme in 2013; this year, the jury, headed by Jane Campion, opted for Ceylan’s meditative character study about a retired actor running a hotel and lording over his village tenants.

“I was scared. I said, ‘I’m going to need a toilet break,'” said Campion backstage about the three hour, 16 minute running time of “Winter Sleep.” But she said the film “took me in,” calling it “masterful” and “ruthless.”

Accepting the award, Ceylan, who has twice won Cannes’ second-highest honor, the Grand Prix, noted it was the 100th anniversary of Turkish cinema.

“It’s a beautiful coincidence,” he said. “Winter Sleep” is the second film by a Turkish director to win the Palme d’Or following Yilmaz Guney and Serif Goren’s “The Way” in 1982. 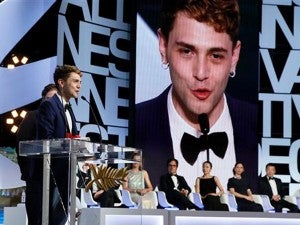 Director Xavier Dolan, left, speaks to the audience after winning the Jury Prize award for the film Mommy during the awards ceremony for the 67th international film festival, Cannes, southern France, Saturday, May 24, 2014. AP

Best actor went to Timothy Spall, who stars as British painter J.M.W. Turner in Mike Leigh’s biopic “Mr. Turner.” He spoke emotionally about a long, humble career that has often gone without such notice.

“I’ve spent a lot of time being a bridesmaid,” said the veteran character actor, whose phone rang as he tried to read his speech from it. “This is the first time I’ve ever been a bride.”

Bennett Miller (“Capote,” ”Moneyball”) won best director for his wresting drama “Foxcatcher,” the American film that made the biggest impact at Cannes. Miller dedicated his award to his stars Channing Tatum, Steve Carell and Mark Ruffalo, as well as producer Megan Ellison.

The jury prize was shared by the oddest of couples: Xavier Dolan’s “Mommy” and Jean-Luc Godard’s “Goodbye to Language.” The two were the oldest (Godard is 83) and youngest (Dolan is 25) directors at the festival.

“Goodbye to Language” is a 3-D art-house sensation from the ever-experimental French master (who sent a short film in his absence from Cannes). “Mommy” is a French-language mother-son drama shot in an Instagram-like 1:1 aspect ratio (a square).

Dolan, a Quebec filmmaker who has already made five features, told Campion that her films inspired him to write strong women characters. Campion’s “The Piano” won the Palme in 1993, the sole female director win.

“There are no limits to our ambitions except those we build for ourselves,” said Dolan.

Alice Rohrwatcher’s “The Wonders,” an Italian drama about a family of beekeepers, was the surprise winner of the Grand Prix. Rohrwatcher was one of two female directors among the 18 films in competition for the Palme d’Or.

“Leviathan,” a tragic satire about small-town corruption in Russia by Andrey Zvyagintsev, took best screenplay. Though the film depicts corrupt local officials in Vladimir Putin’s Russia, it was made with financial support from that country’s Ministry of Culture.

The Camera d’Or, an award for first-time filmmakers, went to “Party Girl,” a portrait of a 60-year-old nightclub hostess by a trio of directors: Marie Amachoukeli, Claire Burger and Samuel Theis.

Most surprisingly absent from Saturday’s awards ceremony was “Two Days, One Night,” the Dardenne brothers’ working-class drama starring Marion Cotillard. The Dardennes have twice before won the Palme d’Or (no one has ever won three).

The ceremony marked the final festival for longtime Cannes President Gilles Jacob, who received a standing ovation. Following the awards, Tarantino introduced a 50th anniversary screening of Sergio Leone’s “A Fistful of Dollars.”