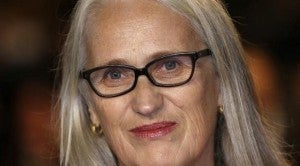 New Zealand director and President of the Cinefondation and Short Films Jury Jane Campion poses on May 22, 2013 as she arrives for the screening of the film “Only God Forgives” presented in Competition at the 66th edition of the Cannes Film Festival in Cannes. New Zealand filmmaker Jane Campion, the only woman to win the coveted Palme d’Or, will head the jury at this year’s Cannes Film Festival, the organisers announced on January 7, 2014. AFP FILE PHOTO/VALERY HACHE

PARIS — Director Jane Campion, the only woman to have won the top prize at the Cannes Film Festival, will lead the jury for the prestigious event this year.

While several women have presided over the jury before, most films presented have been directed by men.

Festival director Gilles Jacob, in a statement, describes Campion as “a true master,” who wowed juries with films “shot through with such courage and humanity and captured such a unique world.”