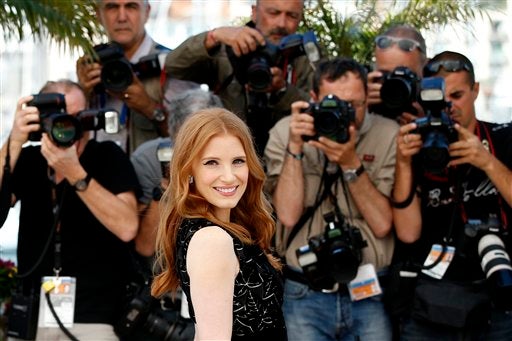 Actress Jessica Chastain poses for photographers during a photo call for The Disappearance of Eleanor Rigby at the 67th international film festival, Cannes, southern France, Sunday, May 18, 2014. AP

CANNES, France — Years ago at a film festival, Jessica Chastain saw a short by Ned Benson and ran up to him to say she wanted to work with him.

When Benson later penned a script about a man’s relationship with his wife before and after a tragic event, Chastain urged him to develop a female perspective: “It was just me wanting equal opportunity,” she says, flashing a smile.

The result was Benson’s innovatively structured “The Disappearance of Eleanor Rigby,” which is essentially three films: “Him” (the tale from the point of view Connor Ludlow, played by James McAvoy), “Her” (centered on his wife, Eleanor Rigby, played by Chastain) and “Them” (a two-hour fusion of both).

After “Him” and “Her” premiered last year at the Toronto Film Festival, “Them” debuted this week at the Cannes Film Festival. The combined version, which Chastain also produced, opens in theaters in September. 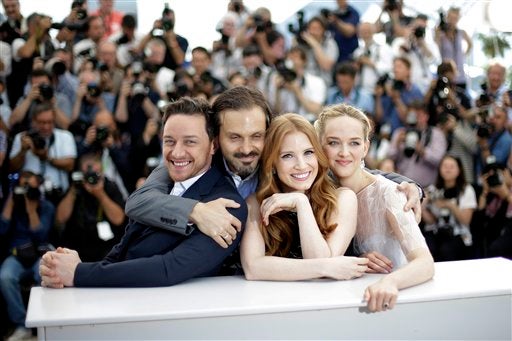 Cannes is where the twice Oscar-nominated Chastain emerged in Terrence Malick’s Palme d’Or-winning “Tree of Life,” a breakout that announced Chastain as an uncommonly gifted actress, seemingly fully formed from the start. In an interview, she reflected on the distance she’s traveled between “Tree of Life” and “Eleanor Rigby.”

AP: How is to be back where your career essentially started?

Chastain: What I’m having trouble understanding is that was only three years ago. It feels like it was years and years and years ago. I don’t know if that’s a good thing or a bad thing. Maybe it’s because I feel like I’ve had so much experience the last three years. But I love coming to Cannes because that premiere for “Tree of Life” was my debut to the world as an actress. It changed my life for the better. It was one of the great, great moments of my life.

AP: What do you remember about it?

Chastain: I was scared a lot.. … I didn’t know how I fit in, so it was very daunting. I guess I just feel more secure. It’s nice to be tired from working instead of tired from worrying.

AP: You’ve been working a great deal in those three years.

Chastain: I made two films already this year. “A Most Violent Year” with J.C. Chandor directing opposite Oscar Isaac, and Guillermo Del Toro’s “Crimson Peak.” I met J.C. at Cannes here last year. Now I make it priority: OK, yes, I’m going to do all this work. But I have to be able to go support other artists and see other movies. I saw “All Is Lost” last year and I was blown away by J.C.

AP: In the varied roles of those three years — from “Zero Dark Thirty” to the upcoming “Interstellar” — have you wanted to explore your range as much as possible?

Chastain: My favorite book is “To Kill a Mocking Bird” and Atticus Finch — I’m going to butcher it — says something about: You don’t judge a person until you’ve worn their skin and walked around it. As an actress, I get to wear other people’s skin. In doing so, it make me feel bigger than myself. Sometimes America, especially, can be a self-centered nation. The more variety of women I play, the more it reminds me of the variety of people in the world and that we’re all connected.

Jessica who? Actress suddenly becomes the ‘it’ girl