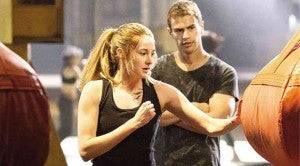 MANILA, Philippines – AT a preview of the trailer of the Hollywood release “Divergent” (now in cinemas), audible gasps of teenaged fans reverberate inside the theater every time hunk du jour Theo James appeared on screen.

Clearly, the new film “Divergent” has a loyal following. Fans from Cavite and Laguna trooped to SM Mall of Asia in Pasay City where the trailer was unveiled.

The event was made possible with the help of the administrators of a Facebook page put up by local followers. The movie is based on a trilogy of novels written by Veronica Roth. (The two others in the series are “Insurgent” and “Allegiant.”)

Already there are comparisons to previous book series-turned-movie franchises like “Twilight” and “The Hunger Games.” Both made killings at the tills.

“Divergent” hopes to duplicate the success of “Hunger Games.” Both films are action-packed and feature a young warrior woman slugging it out in a dystopian future.

“We don’t like comparing the two,” said Rica Superable, Divergent PH Facebook page administrator. “People say ‘Divergent’ is the next ‘Hunger Games’ but we hope ‘Divergent’ succeeds in its own way. It offers something different.”

The budding feminist in Superable appreciates the dominant roles played by women in films like “Divergent.” She asserted, “In the past, female characters were often depicted as damsels in distress. I believe women can very well take care of themselves.”

The “girl-power” theme of “Divergent” obviously hit a nerve among teeners like Superable and her sister Jamie, who put their computer skills to good use in setting up the Facebook fan page, which has attracted 2,600 members and 2,000 likes so far.

Said Superable, a college freshman taking up Communication Arts, “My sister is in charge of the photos; I gather information and do all the research.”