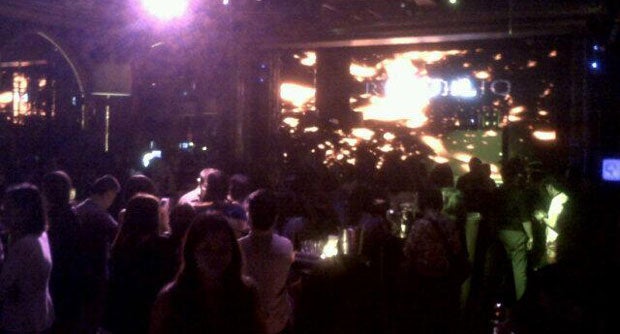 MANILA, Philippines – Fans of Filipino-American singer Bruno Mars were locked in what seems like a busy heaven when the 28-year-old singer dropped by a high-end club in Manila to celebrate The Moonshine Jungle Tour with his supporters Friday.

The club was already packed as early as 10 p.m. but the energy of the crowd did not die down until past 1 a.m. when the much-awaited special guest of the night arrived.

The moment The Hooligans frontman took over the floor, every single soul in the jam-packed party room screamed their cheers for the international star. Mars then rewarded his fans by singing a few lines from his “Unorthodox Jukebox” lead single “Locked Out Of Heaven.”

Though he did not bring a full-blown performance to the party table, Mars still gave fans a reason to get wild as he stayed for over an hour in the club. Now everyone present in the March 21 Pre-Party of this much sough-after artist can proudly brag “I partied with Bruno Mars last night, man.”

This well-attended concert Pre-Party was made possible by Viber and Music Management International in cooperation with LiveBase.

Tickets to Mars’s The Moonshine Jungle Tour scheduled March 22 at the SM Mall of Asia Arena were already sold out as early as a few weeks before his concert.