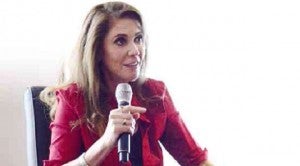 Ivana Chubbuck: “A great actor is someone who’s not afraid to look stupid.” Photo courtesy of Star Magic workshop

MANILA, Philippines – Renowned acting coach Ivana Chubbuck couldn’t stress enough the importance of having a strong work ethic if one aspires of becoming a great actor.

Talented hopefuls are a dime a dozen in Hollywood, “where every waiter and waitress,” she said, “looks like the most gorgeous people on the planet.” But for Chubbuck—who has been teaching acting for 30 years now—beauty and talent are useless without hard work and risk-taking.

Chubbuck had the opportunity to mentor such artists as Halle Berry, Charlize Theron and Brad Pitt before they became A-list superstars. Surely, they didn’t earn their success just because of their good looks and high cheek bones.

“Yes, they are pretty, but it’s all about work ethic,” said Chubbuck, who recently flew to the Philippines and conducted a two-day workshop for ABS-CBN artists.

“It’s also about making artistic choices, pushing the envelope and crossing boundaries,” Chubbuck said, adding that actors should be open to doing things that wouldn’t necessarily please others, but instead would disturb their sensibilities. “That way you create and draw a real reaction from your audience, because you made them think.”

The author of the best-selling book “The Power of the Actor” and founder of the acting school Ivana Chubbuck Studio, she has been teaching acting using her own technique based on the Stanislavski method, which she updated with her background in behavioral science and cultural anthropology.

Chubbuck—who has likewise worked with Kate Hudson, James Franco, Jake Gyllenhaal, Terrence Howard and Jon Voight, among others—hoped to share her knowledge in the workshop, which was attended by select Star Magic stars including Piolo Pascual, Gerald Anderson, Xian Lim, as well as non-Star Magic talents like Liza Diño and Suzette Ranillo.

Assisting in the workshop was Star Magic Artist Training head Rahyan Carlos, who had undergone Chubbuck’s training program last year, and received a certificate allowing him to teach the Chubbuck technique in the Philippines.

What was it like working with Halle, Charlize and Brad?

Halle is one of the nicest people you’ll ever meet. Charlize has a great sense of humor and is a hard worker. She would come to me with all her homework done, and then we’d do more. Brad didn’t have much money back then, and he had to work three jobs just to afford acting classes. He could be working on only a three-line part, but he would insist on working on it.

Are great actors born or made?

Michelangelo started out as an apprentice before he started doing his own paintings. There are a lot of talented people, but not everyone has success. Talent has to be honed.

What’s the difference of your technique from others?

My way of working is about catharsis. It’s not simply about bringing up emotions for emotions’ sake or self-pity—that could hurt and stick for days. It’s about taking pain and using it as a fuel to overcome challenges and win.

Do actors with more life experiences have an advantage?

People take things differently. The main thing is being open and available to who you truly are. The better you know yourself, the more colors you’ll have to play with.

Do you change your teaching approach depending on the medium the actor will be working in?

How do you define a great actor?

Someone who has a strong work ethic, takes risks, makes bold choices, and doesn’t worry if people are going to like what he does. Someone who’s not afraid to look stupid, and is willing to do anything to get what he wants in terms of the objective of a scene.

(Star Magic will open an acting workshop called “Chubbuck Technique” under Rahyan Carlos. The program is open to amateurs and professionals. Registration is until today; call 4152272 or e-mail [email protected])

Read Next
Girl power spells big business at the tills
EDITORS' PICK
WHO says fabric facemasks still work against virus variants
Is your company a growth champion? Stand up and be recognized!
UP president challenges AFP claim on Reds’ campus infiltration
Biden says Covid-19 expected to kill ‘well over 600,000’ in US
Acer Philippines welcomes you to its first flagship store
New Year, New Rediscoveries
MOST READ
Ate Vi’s message to those against ABS-CBN’s franchise renewal
OVP spokesman tells Mocha Uson: Don’t drag us into your nonsense
NBI files raps vs top execs of 2 tech firms
UP president challenges AFP claim on Reds’ campus infiltration
Don't miss out on the latest news and information.