This acting dynasty’s secret to a great performance is really rather simple
By: Bayani San Diego Jr.
Philippine Daily Inquirer / 12:03 AM March 18, 2014 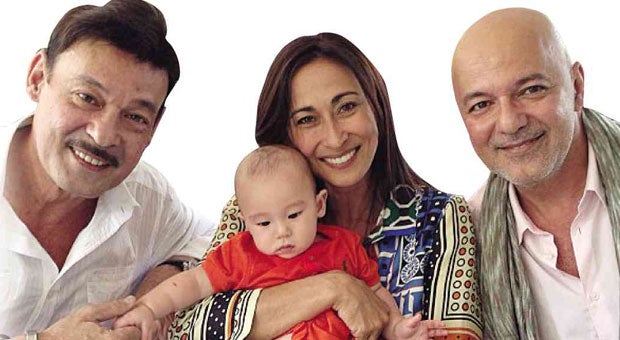 Michael credited their parents for the clan’s prodigious talents. Eddie was underrated, Michael said. “He was a good actor, too.” Michael recently returned from the United States (where he, his parents and his son AJ are now based), to act in GMA 7’s afternoon soap, “Innamorata.”

Like Cherie and Mark, Michael straddles the mainstream and indie scenes effortlessly. He may portray Ishmael Bernal in Chris Martinez’s planned biopic, and is committed to act in two plays this year: the musical “La Cage aux Folles” (Nine Works Productions) and the straight drama “The Little Foxes” with his siblings. It’s the first time they are sharing the stage.

“We last acted together on RPN 9’s ‘Bisperas ng Kasaysayan’ in 1994,” Michael said. They appeared with Rosemarie and Gina in RPN 9’s 1991 series “Cebu,” megged by Gallaga.

“I have the same fears for this project, as for every play I do,” Cherie said, “but since I am collaborating with my brothers, I am sure the end result will be pure magic.”

Mark is on pins and needles. “Stage debut—it’s exciting and scary!” he said.

Cherie and Mark recently shared the screen in Gabby Fernandez’s indie film “Mana.” She described the “high” of acting with a family member: “It’s much more intense. ‘Mana’ was about complex family dynamics so it made the task of tapping personal truths much easier.”

She is currently portraying iconic Vogue editor Diana Vreeland in “Full Gallop” (Carlos P. Romulo Auditorium, RCBC Plaza; last two dates March 21 and 23). “It’s important for me to keep acting,” she said. “I am attracted to good roles and great stories. But it is in theater that we find the best materials for women.”

Cherie has taken the bull by the horns, producing her own stage plays (“Full Gallop”) and movies (Gallaga’s well-received “Sonata”) for her company, My Own Mann Productions.

Michael has ventured into directing. (He did TV shows and movies in the late 1990s and early 2000s. Recently, he directed the Christmas episode of the GMA 7 drama anthology “Magpakailanman.”)

What is it about this clan that yields acting gold? Mark swears he never watched his parents’ old movies, not even to study their technique. “We never talked about work; we still don’t. It’s uncanny that we are known independently… we each went our own way.”

Do they pressure the younger generation to excel as well? “Not really,” Michael said. “I just advise them to love the craft because then, it will love you back.”

For the young ones, the family name is certainly more blessing than baggage. Geoff told the Inquirer: “Everyone expects a lot; I take that as a challenge, not something negative.”

Sid has won several acting trophies himself, but recalled pressure “in the beginning.” He related, “People tended to compare us with our elders. That’s why I didn’t use my real family name as screen name. It’s not a competition; we just want to do well on our own.” (That screen name is a tribute to his dad just the same: It’s the name of Mark’s character in the movie “Batch ’81.”)

Sid, who last appeared in the GMA 7 shows “Magkano Ba ang Pag-Ibig” and “Katipunan,” makes it a point to act in indie movies like Lav Diaz’s four-hour epic, “Norte.”

Geoff is more identified with mainstream projects like GMA 7’s “Adarna,” but would like to do indie films again. He did cameos in Sigfried Barros-Sanchez’s “Mga Anak ni Brocka” and Joel Ruiz’s “Baby Angelo.” “I enjoyed doing those,” he said. “In ‘Baby Angelo,’ I played a stoner… it fit me to a T!”

That’s what sets the Eigenmanns apart, Sid noted. “We are not afraid of becoming the characters we play.” It’s all about honesty, dad Mark agreed, and gave pieces of advice to the third generation: “Be professional. Hone your craft. Keep your feet on the ground. Aim for longevity.”

Gallaga captured the Eigenmanns’ acting secret succinctly: “It’s a total state of being, an instinct for behavioral truth. They have an ability to understand character and be swallowed up by it. It’s an utter disregard for being beautiful, cool or sexy. It’s genetic.” (E-mail [email protected])