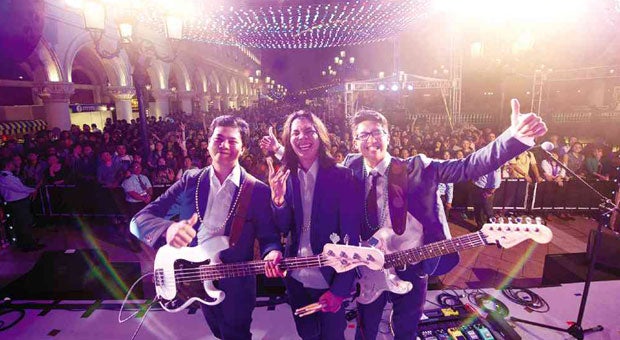 If you haven’t heard of PML, you must be from Pluto—and it’s not even a planet. Bespectacled 20-year-old Paul Marney Leobrera and his band, Bleu Rascals, have been making major sonic waves here and abroad, capping the climb with the groundbreaking conquest late last year of the prestigious Cotai Jazz and Blues Festival in Macau over an international field of veteran jazz and blues musicians.

Barely out of his teens and rising from obscurity, the guitarist-vocalist-band leader has distinguished himself in four short years as one of Asia’s premier blues guitar exponents of his generation.

Starting out as a 16-year-old hobbyist joining open-mic jams at the old Backdoor Blues Café in his home turf, Quezon City, Leobrera was discovered by American expat blues guru and band mentor Tom Colvin via … what else but a YouTube video uploaded in late 2010.

“The lighting was so dark I could not see anything, but the description of the video mentioned a 16-year-old guitarist sitting in on that vid,” Colvin said. Amazed by the kid’s talent, he tracked down Leobrera online and set the youngster up for a jam on what was supposed to be just one song with Rannie Raymundo and Nitoy Adriano at the former Skarlet’s Jazz Kitchen along Timog.

“Jaws dropped when Paul took his first solo,” Colvin related. “This was really special! Rannie asked him to stay onstage for the entire jam and then made him a regular featured guest on subsequent shows.”

Leobrera formed Bleu Rascals shortly after and, with a lot of hard work to perfecting his craft, he has since scaled greater heights with the band. They were picked by the sponsoring Philippine Blues Society to represent the country in Memphis, Tennessee, for the 2012 International Blues Challenge Youth Showcase, where legendary blues and rock photographer Robert Knight told Leobrera backstage, “You have a very special touch.”

A couple of months later, the band opened for American blues heavies Buddy Guy, Trombone Shorty and Keb’ Mo’ at the Singapore Timbre Rock and Roots Music Festival. Later in October of the same year, the Rascals were in Indonesia headlining the Jakarta International Blues Festival with artists that included Jan Akkerman, Guy Davis and Bill Sims Jr.

The youthful guitar prodigy’s star rose higher last year when Japanese blues guitarist Shun Kikuta picked him to perform with as a duo act at the Japan Blues Festival. Kikuta, noted for his decadelong work with the late blues queen Koko Taylor, considers the Rascals “the best blues band of their generation.”

The Cotai meet was held at Macau’s ritzy Venetian hotel and casino. The young Pinoys bested a tough field of finalists that included Berklee-trained Japanese jazz pianist Manami Morita who has shared the stage with, among others, jazz bassist and recording star Esperanza Spalding.

Leobrera’s impeccable and gut-wrenching guitar work was at its usual best, making true believers of even some of the finalists who conceded “no contest” even before the young Pinoy blues trio finished mesmerizing the crowd. “The word ‘jaw-dropping’ popped up at least four times,” reports Colvin, who witnessed the mind-blowing performance with the other artists from the sidelines.

At this early point of his career, Leobrera has established himself as one of the finest electric guitarists to come out of Manila in decades, earning the respect and admiration of practically everyone in the biz. Local legends like Wally Gonzales, Nitoy Adriano, Joey Puyat and Johnny Alegre— and quite a few international artists—unanimously praise the axe phenom.

Colvin sums it up: “It is simply very clear to almost everyone who hears and sees the band that Paul is something very, very special—just way above and apart from anyone else. He is a true genius at music.”