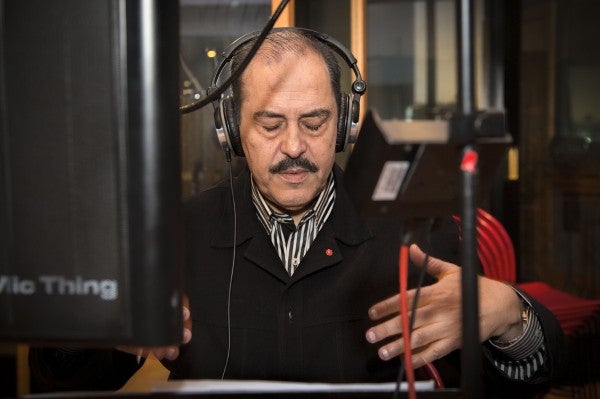 The Legendary Tunisian musician and singer Lofti Buchanak during the preparations in his performance in the global oratorio ‘The Clusters of Light.’

“Sharjah is a great city with a proud tradition of championing the arts across all disciplines and it is an honor to have been invited to perform here,” Lofti Buchanak, dubbed as Tunisia’s “Pavarotti”, said in a statement released by the Sharjah Media Center.

“I am thrilled to be able to play a part in the celebrations to mark Sharjah’s inauguration as the capital of Islamic Culture and to be able to perform in this great play,” he said.

It will run for one hour and 42 minutes on the $38 million open air theater that was constructed on an island with an area of 7,238 square meters.

“‘The Clusters of Light’ is a very important theatrical work, one that imaginatively challenges perceptions of art through a skillful retelling of the life and times of our great Prophet and the origins of Islam,” the statement said.

“Considerable preparations have been made towards staging ‘The Clusters of Light’ in Sharjah. The region’s best Islamic scholars, historical experts and finest musicians have all been consulted to ensure the performance is a truly exceptional one,” it added.

The performance will run from March 25 up to April 5 and hopes to convey the true picture of Islam to the 4,500 spectators that can be seated in the amphitheater.

“I very much look forward to taking part in this project. In particular, its scope and subject matter represents the ultimate ambition for many musicians,” said Buchanak, who is considered one of the best tenors in the Middle East, North Africa, and the Arab world.