Netizens can’t get over ‘Poor Leo’ and his ‘Oscar’ 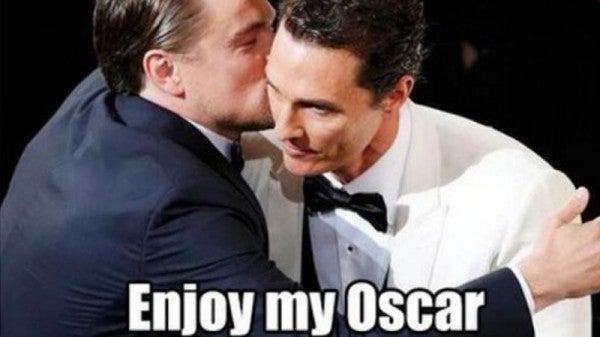 MANILA, Philippines—The 86th Academy Awards made history on Sunday for many reasons.

But those were only side stories to Leonardo DiCaprio, who top-billed “The Wolf of Wall Street”, going home without an Oscar, for the fourth time in history and 20 years since he received his first nomination.

After Matthew McConaughey was announced Best Actor for his performance in “Dallas Buyers Club”, social media has been abuzz with “Poor Leo” comments and memes. Among the most retweeted were photos of DiCaprio giving McConaughey a congratulatory hug.

Days before the Academy Awards, people were writing about how DiCaprio’s win was long overdue. The actor, who has played challenging roles in critically-acclaimed films, was first nominated for an Oscar as Best Supporting Actor in “What’s Eating Gilbert Grape” in 1994. More than a decade later he was nominated as Best Actor for “The Aviator” and in 2007 as Best Actor for “Blood Diamond”.

Fans were hoping he would get it right this time as Best Actor and as producer of the Best Picture nominee “The Wolf of Wall Street”.

However, it was McConaughey who prevailed with his portrayal of AIDS activist Ron Woodroof.

Various memes of DiCaprio and his non-existent Oscar statuette swamped Twitter, Facebook and 9GAG minutes later. One showed the picture of him hugging McConaughey with the words “Enjoy my Oscar,” another showed a seemingly sad picture of him with the line “Always the bridesmaid, never the bride.”

Below are some of the favorites.