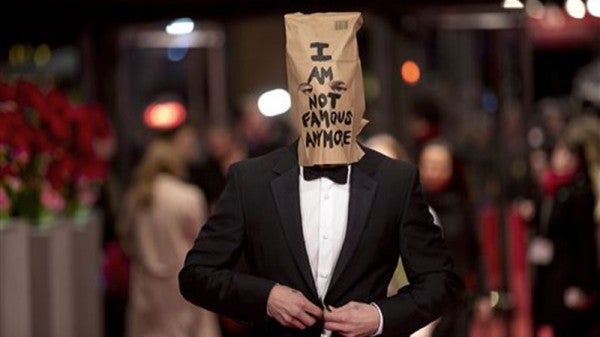 Actor Shia LaBeouf poses for photographers wearing a paper bag over his head that reads, “I am not famous anymore” on the red carpet for the film “Nymphomaniac” at the International Film Festival Berlinale in Berlin on. 9, 2014. Turkey’s Islamic-rooted government has banned “Nymphomaniac” from theaters for its extensive nudity and no-holds-barred sex scenes, drawing accusations of censorship. AP

The film, which premiered to cheers at the Berlin film festival last month, was due to premiere in Turkey on March 14 with a warning against children under age 18 watching it.

But Turkey’s cinema board, which includes representatives from the culture, interior and education ministries, banned the movie outright by a majority vote six in favor and two against on Monday.

“The board decided to ban the commercial circulation of the movie at theaters because of its explicit sexual scenes,” the board’s general director Cem Erkul told AFP.

However, Yamac Okur, a dissenting member of the board, said the decision was tantamount to censorship.

“Barring any cinema movie from commercial screening is unacceptable,” he wrote on Twitter on Monday.

“It could have been displayed by age rating. Otherwise, it is censorship.”

“Nymphomaniac” tells the story of a woman’s sexual awakening from childhood to age 50. It stars Charlotte Gainsbourg alongside Stellan Skarsgard and Shia LaBeouf.

In January, EU member Romania said it had lifted its own ban on the movie and fired the official responsible for barring it following an uproar by artists and the culture minister.

“I strongly condemn the ban on the film ‘Nymphomaniac’ while there is in fact a policy in place on age limit,” tweeted Turkish director Nuri Bilge Ceylan, winner of Cannes’ Best Director Prize in 2008 for his family drama “Three Monkeys.”

Turkey’s Justice and Development Party (AKP) government is already under fire from rights groups and the European Union for its crackdown on Internet sites and the media.

Critics accuse Prime Minister Recep Tayyip Erdogan, who has dominated Turkey’s political scene for 11 years, of moving away from reform.

This has fuelled a long-running debate over what some see as a hidden agenda to Islamise the predominantly Muslim but staunchly secular nation.

Erkul said criticism was normal in a democratic country and that Turkey was not implementing an absolute ban on the film, which would be screened at the Istanbul Film Festival in April.

He said it would not be appropriate to show it at cinemas in Turkey, which are mostly in shopping centres.—Fulya Ozerkan

Read Next
Netizens can’t get over ‘Poor Leo’ and his ‘Oscar’
EDITORS' PICK
Water remains our saving grace right now
The biggest lottery jackpot in the world is $158 million, and even someone from the Philippines could win it
Smart 5G goes live
COVID-19 cases in PH overshoot 122,000 mark
51% of Filipinos think it’s dangerous to publish anything critical about Duterte admin — SWS
PhilHealth mess: Whose heads will roll? Roque says he can’t wait to name names
MOST READ
‘Vexed’: Guanzon raps Topacio over Alzheimer’s remark
Captain astonished that his ship delivered Beirut explosive
COVID-19 cases in PH overshoot 122,000 mark
Locsin to China: Don’t overinterpret
Don't miss out on the latest news and information.