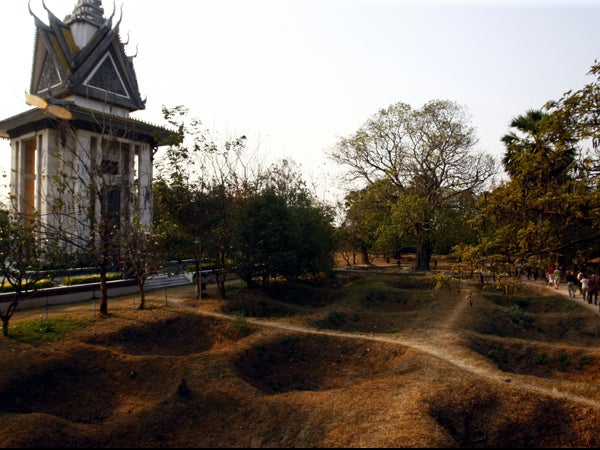 In this photo taken Wednesday, Feb. 19, 2014, visitors walk by the mass grave of the victims of the Khmer Rouge regime next to a memorial stupa filled with victims’ skulls at the Choeung Ek killing field in Phnom Penh, Cambodia. The office of Cambodia’s most celebrated filmmaker is filled with books on the Khmer Rouge – on his desk, on the walls, in the filing cabinets and in every corner of Rithy Panh’s dimly lit office are memories of his country’s national tragedy. In his latest movie, the 51-year-old filmmaker focuses for the first time on his personal story of loss and tormented survival. “The Missing Picture” won an award at last year’s Cannes Film Festival and is up for Best Foreign Language Film at the Oscars this weekend, marking the first time a Cambodian film has been nominated for an Academy Award. AP

PHNOM PENH — The office of Cambodia’s most celebrated filmmaker is filled with books on the Khmer Rouge. On his desk, on the walls, in the filing cabinets and in every corner of Rithy Panh’s dimly lit office are memories of his country’s greatest tragedy.

Probing the painful past started as a coping mechanism for Panh and evolved into a career. For the past two and a half decades, Panh has made movies that he considers his duty as a survivor, and his debt to the dead.

His latest, “The Missing Picture,” is the first time he has focused on his own story of loss and tormented survival. It’s also the first Cambodian film to be nominated for an Academy Award, and could win Best Foreign Language Film at the Oscars this weekend.

The 51-year-old filmmaker said he makes movies because “I had to find a way to work with my memories.”

“When you survive a genocide, it’s like you’ve been radiated by a nuclear bomb,” Panh said during an interview at his Phnom Penh office, which is inside a film preservation center that he runs. “It’s like you’ve been killed once already, and you come back with death inside of you.”

Many of Pahn’s movies have been documentaries that have earned critical acclaim but limited commercial success. He has interviewed the regime’s former torturers, prison guards and survivors as part of his conviction that Cambodia must face its past to build a better future.

“The Missing Picture” is a poetic and highly original film in which the starring roles are played by static clay figures. It may be his most celebrated work yet: Even before the historic Oscar nomination, it won the top prize in the “Un Certain Regard” competition at last year’s Cannes Film Festival, an award for especially creative or thought-provoking films.

The nomination itself is a victory for Panh and for Cambodia, where a film industry is only now re-emerging after Pol Pot’s reign of terror from 1975 to 1979.

“I don’t have the impression of going to Los Angeles all alone,” said Panh, describing himself as brimming with “enormous pride” a few days before leaving for Hollywood. “I feel like I’m going with my whole country.”

The Khmer Rouge era left more than 1.7 million people dead, mostly from starvation, medical neglect, slave-like working conditions and execution. The regime executed artists, writers and filmmakers as part of its Maoist vision to eliminate the educated elite and transform the country into an agrarian utopia.

Panh was 13 when Pol Pot’s army entered Phnom Penh, the capital, on April 17, 1975. It emptied the cities, shut schools and hospitals and forced the entire population to labor in the countryside.

During the four-year genocide, Panh watched his parents, his sisters and several young nieces and nephews die of illness and hunger.

After the regime fell in 1979, Panh fled to Thailand and then took refuge in Paris, a place that remains for him “a kind of womb,” a city at the right distance from his haunted memories that nurtured his intellect. It was there he discovered his passion for making movies and studied filmmaking. Most of his films, including “The Missing Picture,” are joint French-Cambodian productions.

After a decade abroad, Panh returned home to start making movies with the unique perspective of both an insider and an outsider, say those who have studied his work.

“Rithy Panh has a special way of looking straight back into the nightmare,” said Thai filmmaker and movie critic Kong Rithdee. “He looks back and remains very calm and honest about the subject matter. He never rushes to judge.”

Kong calls “The Missing Picture” one of the most memorable movies ever made about the Khmer Rouge era.

“You hardly sense any anger,” Kong said. “As the viewer, you feel angry, but the film doesn’t feel angry.”

To represent his deceased relatives, Panh used hundreds of carefully carved clay figures — an idea that came to him only after he started filming. After initially struggling to find a way to portray people and places that no longer exist, Panh discovered that one of his set designers could sculpt brilliantly with clay.

“I saw something pure in it,” he said. “We all come from dust and earth. And after the filming my characters returned to the earth and dust. I found that idea to be beautiful.”

The title “The Missing Picture” was partly inspired by Panh’s search for a photograph of an execution that a Khmer Rouge guard once told him about.

“The missing picture — maybe it’s the images of genocide that don’t exist. Maybe they’re lost, maybe they’re buried somewhere, maybe someone hid them,” said Panh. “What interested me was the search for this image, which is what led me to tell the story.”

The title also refers to a more personal picture he will never get to see.

“It’s the one that I miss the most. It’s to see my parents get older, to be able to share time with them now, to help them, to love them, to give them back what they gave me,” he said, lowering his voice. “I would prefer to have my parents with me than to make movies about the Khmer Rouge.”

‘Transit’ in list of foreign language films vying for the Oscars

All bets off as crowded Oscars race enters homestretch