All bets off as crowded Oscars race enters homestretch 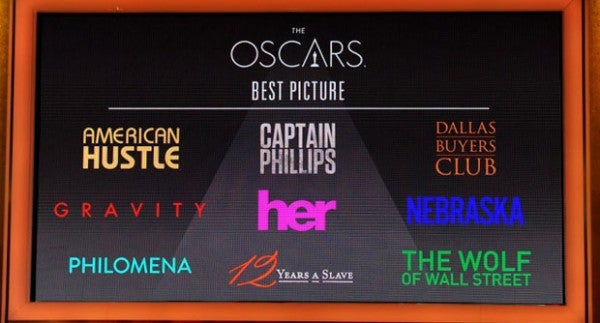 A giant screen shows the Oscar nominees for Best Picture, at the 86th Academy Awards nominations announcement, at the Academy of Motion Picture Arts and Sciences, January 16, 2014 in Beverly Hills, California. The Oscars will take place March 2, 2014 at the Dolby Theatre in Hollywood, California. AFP

HOLLYWOOD – The race for Oscars glory is entering its final week in Hollywood and suspense is building, as one of the most crowded fields in decades battles for Academy Awards gold.

Three films — historical drama “12 Years a Slave,” space thriller “Gravity” and crime caper “American Hustle” — are all frontrunners for the coveted best picture prize to be handed out on March 2.

In the acting categories, Cate Blanchett leads the pack for her turn in Woody Allen’s “Blue Jasmine” while Matthew McConaughey is widely tipped for his portrayal of homophobic AIDS activist Ron Woodroof in “Dallas Buyers Club.”

For supporting cast, Jared Leto’s role as Woodroof’s unlikely transsexual business partner has put him ahead of the field, while Lupita Nyong’o could take home a statuette for her big-screen debut in “12 Years a Slave.”

But all bets are off for the big prize of the night, the winner of which will be announced at the end of the 86th Academy Awards ceremony hosted by US talk show host Ellen DeGeneres.

No shoo-ins this year

“One thing is confirmed for certain: There will be genuine suspense until the last envelope is opened,” wrote Variety’s Tim Gray after Britain’s Baftas, the last major awards show before the season-climaxing Oscars.

Voting for the famous golden statuettes began on Valentine’s Day, and the nearly 6,000 voting members of the Academy of Motion Picture Arts and Sciences have until Tuesday afternoon to cast their ballots.

That is when exhausted nominees can in theory sit back after their months-long marathon campaigns of media interviews, red carpet appearances and publicity spots, which come to a frenzied peak for the 12 days of actual voting.

It has been a long awards season — extended by the Winter Olympics in Sochi, which bumped the Oscars from February into March.

And it has also been one of the most grueling, partly due to the bumper crop of films vying for glory.

“12 Years a Slave,” a harrowing true story of a black man sold into slavery, won the top prizes at the Golden Globes and the Baftas.

Its British director Steve McQueen would be the first black filmmaker to win the Oscar for best picture. And “Slave” star Chiwetel Ejiofor could yet pip McConaughey for best actor.

The film earned nine Oscar nods, including one for Michael Fassbender in the best supporting actor category for his searing turn as a sadistic slave owner.

Cuaron is the frontrunner for the best director prize, and his star Sandra Bullock earned high praise for her work in the 3D space drama, prompting some to suggest she could cause an upset in the best actress race.

The star-studded Oscars broadcast will include performances by Irish rockers U2 and a first Oscars turn by veteran Bette Midler.

It will be preceded by the usual fashion extravaganza on the red carpet, as Tinseltown’s finest parade along Hollywood Boulevard and into the Dolby Theatre.

Legendary Hollywood kingpin Harvey Weinstein, behind recent Oscar winners “The King’s Speech” and “The Artist,” said the sheer number of good 2013 movies squeezed out others that would normally have made the cut.

He has thrown his considerable muscle behind moving Irish family drama “Philomena,” after other Weinstein-backed films failed to make the best picture shortlist, including “August: Osage County” and “Lee Daniels’ The Butler.”

“Last year, (‘The Butler’) would have been a lock for a nomination with my hands tied behind my back and blindfolded,” said Weinstein in a recent interview.

“This year, it’s different. No frontrunner, three movies tied for first place, and one, the little Irish film, charging up on the outside lane,” he added, plugging “Philomena” to the last.